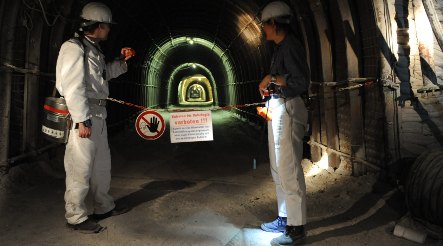 Officials who confirmed the reports are now scrambling to get them removed.

A spokesman for the Federal Office for Radiation Protection (BfS) confirmed a DDP report on Friday, saying, there was some there, but only a small amount of old stocks.

He said the explosive was stored, “so that obviously there is no danger for the running of the store, or for the waste.”

The explosives would be rapidly removed, he added.

The DDP report said an explosives storage chamber still containing a variety of dynamite-related substances, can be found near the area where the radioactive waste is being kept.

Files from the Research Centre for the Environment and Health (GSF), which used to run the storage facility, show that over the last few years a bog of radioactive salt water has built up by the entrance to the explosive chamber.

“Explosions are currently only being conducted in relation to tunnelling and excavation work. The contours of the chambers will be carefully blasted,” the report quoted the records as saying.

Stefan Wenzel, chairman of the Green party in the Lower Saxony state parliament said he was surprised by the news. He said he had heard that there had been such a chamber in the past, but that he was now asking himself: “Why do they still need explosives in Asse?”

Asse operators came under fire last autumn following revelations that they had failed to alert the government to serious safety violations and worrying conditions at the site.

German Environment Minister Sigmar Gabriel responded saying that the facility has “as many holes as Swiss cheese,” adding that it remained unclear who was ultimately to blame for the serious safety violations at the site.

Since then a broad monitoring programme has been started, to check radiation levels and monitor rates of cancer and leukaemia in current and former workers there.

It was also recently revealed that toxic chemicals including arsenic, lead and powerful pesticides are also among the 126,000 barrels of untouchable waste which has been stored at the site since 1978.