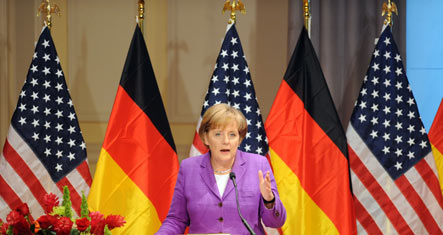 Obama and top aides have repeatedly denied reports that Merkel and Obama – who met earlier this month in Dresden, and also held talks in April – differ on issues like Afghanistan and how to revive the economy.

But the two have been unable to shake the talk of a rift between Berlin and Washington on an array of important issues.

“I am looking forward to the meeting with the President, (our relationship) is becoming one of intense, and friendly cooperation,” Merkel said after arriving in Washington.

“Our positions on the world’s problems are very close and we want to work together to find common solutions. We want to find answers to these problems together with the United States.”

Obama and Merkel will first hold private talks in the Oval Office on Friday, then throw open their consultations to expanded delegations, in line with the US president’s practice in meeting foreign leaders. They will then hold a joint press conference in the White House Rose Garden and have lunch.

White House press secretary Robert Gibbs said on Thursday that a wide range of issues would dominate the talks including the Iranian political crisis, economic recovery, energy and climate change.

The White House talks will also attempt to forge common ground ahead of the Group of Eight summit of leading industrialised nations in Italy in July. The world’s most powerful economies are due to put forward proposals for financial markets and seek concerted efforts to combat global warming, ahead of world climate talks later this year.

Merkel arrived in Washington on Thursday, the eve of a crucial vote in the US House of Representatives on a climate bill that forms a centrepiece of Obama’s sweeping domestic agenda.

The president called on lawmakers not to be “afraid of the future” and to vote for the bill to cut US greenhouse gas emissions, ahead of what is expected to be a tight vote.

The Obama administration want to secure a greater German contribution to its new strategy to flush out Taliban and al Qaida remnants in Afghanistan, but aides say they are aware of Merkel’s political limitations. The war is highly unpopular in Germany, and Merkel, with elections looming later this year, cannot afford to buck public opinion.

Karen Donfried, executive vice president of the German Marshall Fund of the United States, said while the United States and Germany had political differences, they did not necessarily point to a personality clash.

“It is not surprising that there are going to be some differences – whether they like each other or not – it wouldn’t change that perspective.”

Merkel has been critical of US strategy on the economic meltdown, and has expressed fears that tactics like the $787 billion US stimulus package could stoke inflation.

The chancellor’s advisors say she would like Obama to lay out an “exit strategy” after his massive spending to fight the crisis, and note that she had long warned of the danger of Wall Street excess and loose regulation.

She also criticised the US Federal Reserve this month, urging a return “to a policy of common sense” and slamming the Fed’s massive buy-up of government and private debt.

Asked about the “exit strategy” idea on Thursday, Gibbs said Obama was still concentrating on the crisis, which has cut a swathe of unemployment across the United States.

“We’re making progress, but I think the President is still focused on ensuring the quick implementation of the recovery legislation and the continued monitoring of different aspects of our recovery,” he said. “I think the President believes there’s work left to be done.”

Merkel has also been vague in her pledges to help Obama close the Guantanamo Bay prison facility.

She promised assistance during the Dresden meeting, but her government has resisted two US requests for Germany to take in specific detainees, citing a lack of information from Washington.

Analysts say that Obama’s task in persuading European allies to take Guantanamo Bay prisoners has been complicated by opposition among lawmakers to taking prisoners on US soil.