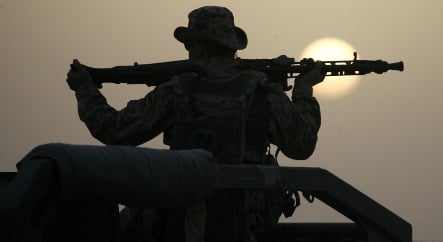 It was October 2008 when German Defence Minister Franz Josef Jung first parted with Berlin’s preferred parlance. Instead of talking about soldiers that were killed or injured, the minister began using the terms “fallen” and “wounded” during a memorial service in Zweibrücken.

At the time, Jung was reacting to demands from the troops. The words were a concession acknowledging the dangers the German soldiers face in deployments abroad. But he refused to take the final step and utter the word “war.”

And nothing has changed since. As Jung on Tuesday evening was once again forced to talk about the deaths of not just one but three soldiers in Afghanistan, he refused to use the controversial word. A rebuttal came swiftly from Reinhold Robbe, the parliamentary commissioner for the military. It’s war taking place along the Hindu Kush, he explained to the minister.

There are good and not-so-good reasons for the German government to shy away from using the word “war” in connection with the killing and dying German soldiers are doing in Afghanistan.

It certainly can’t just be the accepted definition of war that is causing the government to so stubbornly reject the term. After all, war can – but doesn’t have to be – a conflict between countries. History tells us that there were innumerable other conflicts that have been referred to as wars. And the Americans have used the word for their operations in Afghanistan for some time. Shouldn’t the deciding factor be how the German soldiers define what they are experiencing?

“If we were to talk about war, we would just be focusing on the military dimension,” says Jung to explain his linguistic choice. Apparently, the idea is to not encourage a military escalation with a verbal escalation. This is an argument that is primarily aimed at those living with the immediate impact of the German deployment – the Afghans. Jung’s concern is that if the German government were to talk openly about a war, they would be seen even more as an occupying force.

In addition, it can actually be useful to be conservative when talking about war. “Emphasising the difference between war and peace, which spark different reactions, is important and quite often secures peace,” says Herfried Münkler, a political scientist in Berlin.

If the German government confessed to waging war, it would also mean that the primarily defensive strategy against attacks was no longer possible. It could also become more difficult to deflect demands from allies for more comprehensive military operations.

On the other hand – and this argument belongs with the weak reasons – not using a war lexicon has something to do with the German public. After the “Peace Operations” failed to gain much traction, there is apparently a fear that support for a war would face even more opposition. In an election year, this is a debate the governing coalition doesn’t want.

But if the choice of words is supposed to be about acknowledging the dangers that the soldiers face, then direct language would, in this case, be much more honest than indirect war rhetoric. Besides, the public isn’t buying into these linguistic gymnastics anyway.

“We should be careful when we use pathos in this country,” said Christian Schmidt, the German parliamentary liaison to the Defence Ministry, as he recently tried to explain his rejection of the word “war.”

But don’t the terms “fallen” and “wounded” evoke far greater sympathy? Are they not even more dishonest? Don’t they, in connection with war, have a much more sanctimonious sound? Something we hoped we’d never have to hear in this country again? The related English term is much less lofty but all the more exact: “Killed in action.”

At least the defence minister has so far refrained from using the phrase: “Fallen for the Fatherland.” Instead, German soldiers are dying “for peace.”