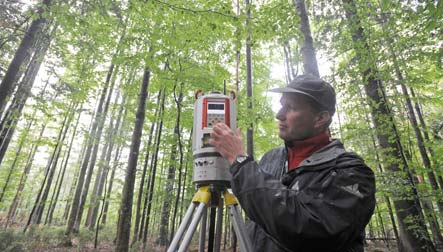 The project should deliver exact information about the number, size and kind of trees in the Bayerische Wald national park, and even dead wood and new saplings.

Until now, 30 woodsmen have been sent out every decade, to visit 5,800 specific sites and report back on what they find.

It takes them six months to do this, and costs €1.5 million to cover barely one percent of the park’s area, after which rough estimates are made as to what kind of condition the forest is in.

Airborne surveys are also conducted, but they are limited to imaging the tops of trees only.

But now Marco Heurich, from the national park, told the Süddeutsche Zeitung, he and his team are working on the laser scanning project to create an exact reconstruction of the park – along with each individual tree.

“Our next inventory is planned for 2015 and we hope to have the technology ready by then,” he said.

The scanner, which cost €100,000 sends out 125,000 measuring laser impulses per second and can receive and save up to a million pieces of data at the same time, is usually used to make accurate measurements for building projects.

It will be hung from a helicopter and should not only be able to record the tree tops, but also penetrate as far as the ground, to deliver accurate information about the height, wood volume and even the degree of rejuvenation.

The Munich College for Applied Science has been working on the method for four years, hoping to revolutionise forest maintenance procedures.

“One can practically exactly reproduce the wood in three dimensions,” Professor Peter Krzystek told the paper.

This would enable managers to make better informed decisions about managing and improving the condition of the woodland, as well as monitoring alterations due to climate change.

The scanner is currently being tested on the ground before it is taken into the air.