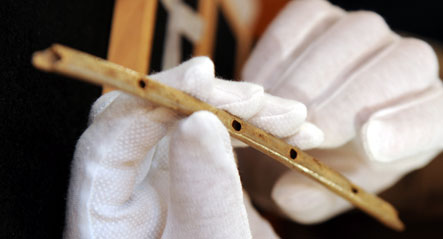 Found in the Ach Valley of southern Germany, the nearly intact five-hole flute was meticulously carved with stone tools from the hollow wing-bone of a giant vulture, says the study, published Thursday in the British journal Nature.

Fragments from three ivory flutes unearthed at the same site, along with nearby instruments not quite as old, suggest that humans who had then only recently migrated to the Upper Danube enjoyed a rich musical culture.

And a stunning female figurine from the same period found only a couple paces from the bone flute, reported last month, points to a broader artistic flowering. Indeed, the area within the cave that yielded the flutes reveals a veritable artist’s atelier.

There is debris from the flint tools used to chip the instruments; traces of worked bone and ivory from mammoth, horse, reindeer and bear; and burnt bone, one of the ingredients – along with minerals, charcoal, blood and animal fats – used by Stone Age humans for cave painting.

“We can now conclude that music played an important role in Aurignacian life in the Ach and Lone valleys,” commented Nicholas Conard, a professor at the University of Tübingen and lead author of the study.

Aurignacian culture flourished in western Europe during what is known as the Upper Palaeolithic period, from about 40,000 to 10,000 years ago.

The bone flute, part of a treasure trove of artifacts uncovered at the Hohle Fels Cave, was found in 12 pieces scattered over an oval area the size of a large plate. It is in superb condition and reveals many details about its manufacture.

Nearly 22 centimetres (8.7 inches) long and 2.2 centimetres (one inch) in diameter, the instrument has precisely carved markings next to four of the finger holes, probably to indicate where they should be cut. There are two deep, V-shaped notches carved into the end into which the musician blew.

Conard reports that a playable replica of the flute has not yet been made, but says it is likely to produce a range of notes comparable to many modern types of flute.

The technique for making the ivory flutes – of which only a few fragments remain – is far more complicated, according to the study.

First the craftsman would have hewn the rough shape of the instrument from a solid, naturally curved piece of tusk. Then the piece of ivory was split lengthwise, the halves hollowed out, and the holes carved. Finally the two halves of the flute were rejoined with some kind of glue to form an air-tight seal.

Using radiocarbon dating techniques, Conard calculated that the newly discovered bone and ivory flutes were made at least 35,000 years ago, pushing back the age of the oldest known instrument by some 5,000 years.

Conard speculates that late Stone Age music did not contribute directly to the evolutionary success of the first modern humans. But it may have given them a slight edge over neighbouring Neanderthals, who died out even as Homo sapiens sapiens flourished.

“Upper Palaeolithic music could have contributed to the maintenance of large social networks, and thereby have helped facilitate the demographic and territorial expansion of modern humans” compared to the more “culturally conservative” and isolated Neanderthals, he said.

Scientists have long speculated that Neanderthals played music too, but no evidence of their musicality has been found so far.