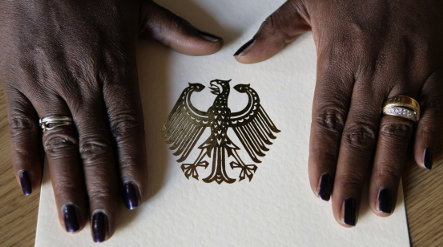 Current rules mean that people born in Germany to non-German parents can have dual citizenship as children, but have to choose which one they keep at some point between their 18th and 23rd birthdays.

Wiefelspütz said he would like to see “more generosity with the acceptance of dual citizenship, at least with the first immigration generation.” But he said talking to the SPD’s conservative coalition partners on the subject was like talking to a brick wall.

Now a group has set up a website to coordinate a campaign to change the rules so that the people concerned can keep both passports.

Launching the initiative in Berlin on Wednesday, former federal integration representative Marieluise Beck, of the Green party, said it was unfair for Germans who were confronted with questions over their loyalty because their parents come from different countries.

The forced choice creates a basis of mistrust between the state and its naturalised citizens, she said.

This is made even more unfair by the fact that people who have one German parent and one from a different European Union country, or have dual citizenship for other reasons, do not have to make that choice.

Axel Schulte, professor at Hannover University estimates around 49,000 people in Germany have been forced to choose so far, while this year a further 5,000 people will have to do so.

The group said it had broad support from all political parties apart from the conservative Christian Democratic Union.

Hubertus Heil, Secretary General of the Social Democratic Party, said: “We want that children who are born in Germany, and whose foreign parents have made their homes here for a long time, automatically receive German citizenship – and keep it.”

Other signatories to the group include former SPD chairman Hans-Jochen Vogel, former parliamentary president Rita Süssmuth of the CDU, author Navid Kermani as well as the chairman of the Turkish Community in Germany, Kenan Kolat.