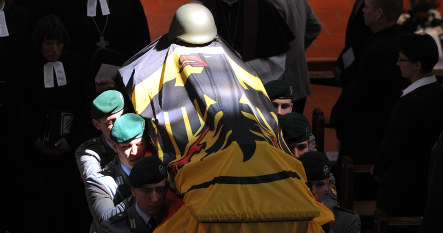 An archive photo of a German solider killed in Afghanistan. Photo: DPA

They drowned after crashing their Fuchs armoured personnel carrier in a water-filled ditch while trying to escape an attack.

Jung responded robustly on Wednesday, telling public broadcaster ARD: “We will fight anyone who attacks us. The army has the necessary answers for this.” He said there were enough soldiers to provide back-up.

But the Christian Democratic Union politician refused to talk of a war, saying: “With that, one misses the fact that our strategy is a different one.”

He said German soldiers could not be successful if they only acted militarily, and they were also helping and enabling the locals to improve their lives, and thus trying to gain their trust.

“We are not occupiers there,” he added.

Leading members of the centre-left Social Democratic Party (SPD) also defended the German operation in the country, and stressed it was much more than conducting patrols and hunting terrorists.

Deputy Foreign Ministrer Gernot Erler of the SPD told the Neue Presse newspaper there was no need to change the strategy. “The operation is correct. And we are in close dialogue with the Americans, to talk about how we can become even more effective,” he said.

Yet his party colleague Reinhold Robbe, defence representative for parliament, called on Wednesday for Germany to recognise it was fighting a war in Afghanistan.

He said the public continued to repress what he said was the fact that its soldiers were at war there. “I ask myself where are the clear words needed from the churches, the trades unions, industry?”

Despite his desire to call operations in Afghanistan a war, Robbe said he was not calling for the German soldiers to be brought home.

“We have to explain to the people why this operation, why these battles are necessary. To pull out now would mean that everything was for nothing,” he told the Bild newspaper.

Opposition parties are calling for a withdrawal from the region, with Green parliamentarian Hans-Christian Ströbele saying an exit strategy must be developed and followed to end what he said on N-TV television was a “senseless and endless war.”

Gregor Gysi, parliamentary head of the hard-line socialist party The Left said the aim of reducing terrorism with the Afghan operation would fail and that it only increased the danger of terror attacks in Germany and elsewhere.

Free Democrats defence spokeswoman Elke Hoff said it was not good enough that the German army did not have its own air support capacity in Afghanistan.