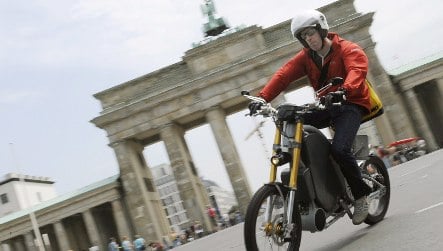 It’s been seven years in the making, but Stefan Gulas believes his creation’s time has finally come.

The lanky 38-year-old Austrian has managed to meld slick biker styling with cycling sensibility in the latest version of what he’s dubbed the eRockit – a pedal-powered bolt of lightning on wheels.

“The idea was to build a machine like a motorcycle, which can out-accelerate cars,” Gulas told The Local during recent test ride in Berlin. “It’s our own system. It’s a new technology not implemented anywhere.”

Formed in late 2004, his now 12-man company builds a variety of bikes, mixing the asthetics of a motorcycle with a battery motor and adding bicycle pedals to come up with a totally unique two-wheeled vehicle. Powered by electricity, the “human-hybrid” still relies on pedalling to propel it forward at speeds of up to 80 kilometres (50 miles) per hour.

“We’ve tried to keep the character of a bike,” said Gulas. “Something that’s electric, that’s cool and sexy that people want to ride – that was the driving force.”

Despite its powerhouse performance, the eRockit otherwise behaves exactly like a regular bicycle. The rider must pedal to accelerate and brakes are located on both handlebars. But the 12-horsepower electric motor situated between the rider’s legs offers a “superhuman” sensation, according to Gulas.

“It feels like you’re riding a bike, so you always compare it to the speed you could go on a bicycle,” he explained, adding that easily passing cars “just keeps you smiling.”

But such thrills won’t come cheap. The newest model costs nearly €30,000, making it an expensive joy for those that can afford the firm’s handcrafted precision products. And Gulas makes no excuses for the high price tag.

“Our goal is not to decrease the cost, but rather to fully develop the concept of the human hybrid,” he said.

Instead, he suggested the lofty purchase ought to be seen as making a stylishly green statement. The zero-emission vehicle can travel a far as 80 kilometres on a single charge, which takes four hours plugged in at home.

“It’s very important that it is environmentally friendly,” said Gulas. “The ice caps are melting and yet, you boost your 500 horsepower. I don’t understand that,” he said, showing his frustration with the dominant driver credo of day.

“But people don’t want to drive boring things, so if it convinces people to convert to non-polluting vehicles because they are so attractive, it’s an added bonus.”

Though his firm will build only 15 bikes this year, Gulas predicts the eRockit’s “human-hybrid” model will become widespread in the next ten to 15 years.

But he doesn’t want his innovative baby to become cheap product for the masses, instead preferring to target “the high-end” market.

“We are the original,” said Gulas. “People will come to us.”

Check out a photo gallery of the eROCKIT