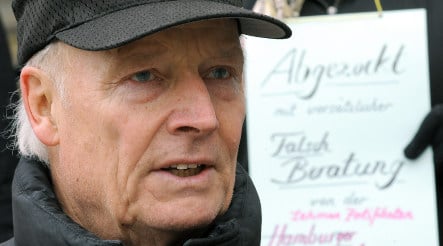 The Hamburger Sparkasse (Haspa) said it would appeal the decision handed down by the Hamburg District Court on Tuesday – which was greeted by applause in the public gallery, according to a report in the Financial Times Deutschland

Bernd Krupsky, a 64-year-old former teacher, said the investment advice he received from the Haspa in 2006 was wrong on two points, and that he would not have bought the Lehman certificates otherwise.

A Haspa spokeswoman said the court had, “written retrospective obligations for banks, which did not previously exist.”

The court heard that Haspa had not told the former teacher that the Lehman bonds he bought were not covered by the German deposit protection system.

Haspa had also failed to disclose a conflict of interest when giving him the advice to buy – at the time Haspa had a large number of Lehman bonds which it was selling to customers at a profit. Unsold bonds would have to be returned to Lehman at a loss.

Experts estimate the number of people in Germany who lost money in Lehman Brothers to be between 30,000 and 50,000. A spokeswoman for the Hamburg court told the FTD there were at least 25 other cases currently being examined in courts across the country.

The first case to be finished was last November, with the district court in Frankfurt rejecting the claim.