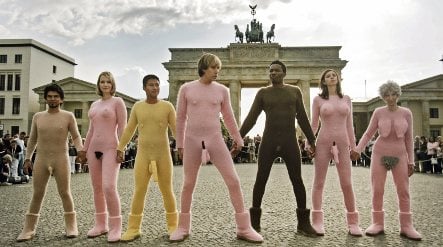 Baron Cohen, known for his role as the bumbling Kazahk reporter “Borat,” posed with “naked” models in similar garb at the Sunday evening event.

Check out a photo gallery of Bruno at the Brandenburg Gate.

In “Bruno,” Baron Cohen plays a gay Austrian fashion journalist, whose eccentric appearance has already stirred up controversy around the world.

Just a few weeks ago, he stole the show at the MTV Movie Awards after sweeping over the audience in a harness and landing facedown in rapper Eminem’s lap. He exposed his naked bottom to millions of viewers and the allegedly homophobic US rapper. But it later revealed this stunt was premeditated by both Baron Cohen and Eminem.

Click here for The Local’s listings for films playing in English.