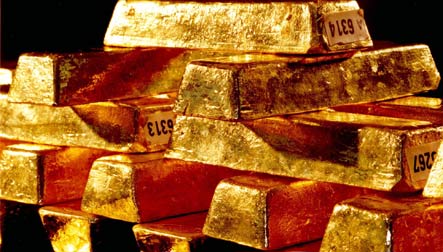 Passengers who clear security at Frankfurt airport and fear inflation more than flying could soon find an answer with a machine that doles out a bright, shining answer: gold.

“The reaction by Asian people was fantastic,” gold dealer Thomas Geissler said after his company, TG-Gold-Super-Markt, tested a prototype dubbed “Gold to Go” in the airport’s main hall last week. “A guy was delighted to get a piece of gold to bring back to his wife.”

Geissler hopes to have a working model up and running within three months in a shopping area beyond the X-ray machines where check-in stress evaporates and passengers can kick back. And he is aiming big: Geissler wants to install 500 machines in airports throughout Europe, as well as in train stations, jewellers and up-scale stores in Austria, Germany, and Switzerland.

Germany, one of the countries worst hit by the global recession, is seen as a wise place to launch Geissler’s machine because the economic crisis has driven up gold sales in Europe’s biggest economy.

According to the World Gold Council, German investors – and consumers over the border in Switzerland – are hoarding gold at “levels not previously recorded.”

In 2008, there was “a tremendous swing from trivial levels within Europe to very substantial levels” in gold sales, said Neil Meader, research director at GFMS, a London-based precious metals consultancy. “In the closing months of the year, Germany was the star performer.”

While the rest of the world worries about deflation, German economists, bankers and politicians are warning huge government deficits could quickly re-ignite inflation once a sustained economic recovery gets under way.

This worries Germans sick, because hyperinflation and two world wars wiped out many families’ savings in the 20th century, Geissler explained. “Germans are frightened by inflation … Twice was enough.”

Meader, meanwhile, said another factor driving consumers to gold was a “distrust of banks” after a credit crisis drove the global financial system to the brink of collapse last year.

Geissler’s vending machine will sell packets containing from one gram for around €30 ($42) at present to five and ten grammes for about €245, along with Australian “Kangaroo” and Canadian “Maple Leaf” coins.

A gramme of the stuff will set customers back by 20 percent less than over the counter at a German bank, but his margin represented just “a nice and reasonable profit” compared with market rates.

Software developed by his firm updated prices every two minutes, he stressed, which meant “we will have nearly a real time price compared with the London gold market.”

And in case police are worried about unscrupulous customers using machines to launder ill-gotten gains, the company is installing video cameras and some machines will be credit card only, he said. “We will pay maximum attention,” he vowed.

The first machine is slated for installation in a Hugo Boss clothing store near the company’s headquarters south of Stuttgart, once talks have been wrapped up.

He confidently predicts a brisk trade at the machines, which will each contain a maximum value of €50,000 ($70,000) – less than in most cash machines.

At sites like Frankfurt’s bustling international airport, “I think you will have to fill up the machine every day,” he forecasts.

A GFMS survey has forecast demand will “drive the bull market into a ninth consecutive year” and could propel gold prices to the $1,100 mark.

In Germany’s financial capital, Geissler’s machine attracted stares, and “some bankers couldn’t believe what they saw,” the gold dealer said.

“It will take a little time until everyone is used to the sight of a gold vending machine,” he acknowledged.