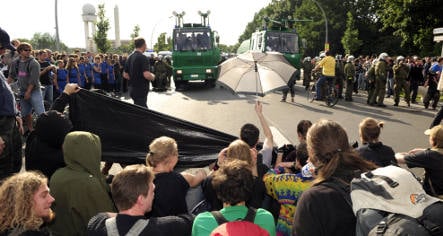 Organisers said 5,000 protesters showed up to try to breach the fences and occupy the historic airport, calling for the valuable land to be made accessible to locals rather than sold to developers.

At least 1,500 police officers were posted around the fence, and used tear gas and water cannon against the protesters, some of whom threw stones and bottles.

The airport was officially closed last October, and there remains no agreed plan of what to do with the space, and the enormous iconic building.

Left-wingers fear that it might be sold off for luxury flats, and have linked worries about its future with resistance to development plans for other parts of the city, such as those planned for parts of the Spree river bank.

Others simply want the 400 hectare space to be opened up for use by locals – and even greened and turned into a huge park.

Many turned up dressed as clowns intent on answering the organisers’ slogan question of “Have you ever squatted an airport” which was to be seen on stickers and T-shirts around the city over the last couple of weeks, with a “Yes”.

The protesters approached the airport from three different directions, dodging and splitting up the police.

But although many got as far as the perimeter fence and rattled it for all they were worth, and some managed to cut some of it before being dragged away by the police, no-one managed to get in.