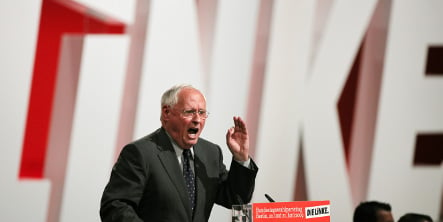 “It’s only by battling courageously side-by-side that we can win,” The Left (Die Linke) chairman Oskar Lafontaine told his audience, torn between a fundamentalist wing and gradualists who would be ready to compromise for a deal with the centre-left Social Democrats (SPD).

The Left party currently polls between eight and 11 percent, a general improvement in its affairs since the last federal election where it got 8.7 percent. It has sought to profit from the financial crisis, stressing taxation schemes which would punish the rich and redistribute wealth to the poor.

Lafontaine, who was briefly finance minister in the first SPD-Green government in the late 1990s, outlined manifesto goals based on redistribution of wealth including hiking the minimum national wage to 10 euros an hour – which would be a 33 percent rise.

He also wants taxes slashed for the poorest and the introduction of new taxes for the super-rich which he claimed would raise “€90 billion per year”, as well as shares for workers in businesses bailed out by the state.

He said landowners, speculators and those who had profited from financial capitalism in recent boom years should pay for the effects of the economic crisis, which has pushed Germany, Europe’s largest economy, into recession.

Lafontaine says he would join a coalition with the SPD led by Foreign Minister Frank-Walter Steinmeier, said it was their fault that coalition discussions were not taking place.

Seeking a majority for left-wing parties in parliament so they could form a government, he said the current refusal of the SPD to countenance talks was a “stupid” position for his rivals to adopt.

But the Left’s parliamentary party head Gregor Gysi has consistently opposed this position, saying the SPD must ‘re-social-democratise’ itself before the Left could work together – and received ovation for this demand at the meeting.

SPD head, Franz Müntefering, speaking in Munich, stressed how academic this argument within the Left was, saying there was no way his party would form a national coalition with them. “Whoever votes for the Left must know that it is for the opposition.”

Also on Lafontaine’s party wishlist was the withdrawal of German troops from Afghanistan and the dissolution of the western military alliance, NATO.