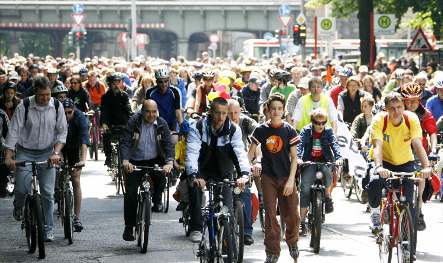 Bikes took over Hamburg in 2007 too Photo: DPA

Bikes, pedestrians and skaters will rule over the city centre after midday, while a three-kilometre stretch will be filled with stages where live bands will play, and even a poetry slam will be held.

Nearly all the arcades, shops, cafes and restaurants will be open, beach bars will be serving drinks and for those who do not want to ride their bike, the entire public transport network will be free all day.

A bicycle demonstration organised by the German Bicycle Club, ADFC, will start at around 60 spots around the city and head towards the centre, to meet at the Binnenalster at 1.30pm.

ADFC head Torsten Prinzlin told the Hamburger Morgenpost, “We are still waiting for the improvements for bike traffic which were promised by environment senator Anja Hajduk.”

Many other towns and cities across Germany will be marking the summer solstice with Fête de la Musique, with bands playing for free in all possible venues, as well as out in the streets all day and into the night.

A full list of towns which are celebrating what has become the World Music Day, and links to their websties can be found on www.fetedelamusique.de/161.0.html