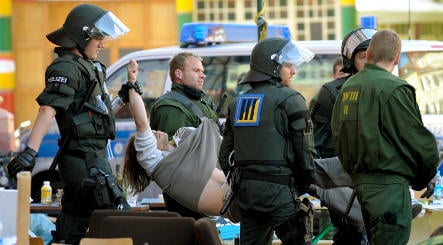 The roughly 100 students had been in the offices since Wednesday, and had ignored a demand by the authorities to leave, upon which the university filed charges of trespass.

Around 160 police officers were sent onto the university property to remove the students, some of whom formed a sit-down blockade and were carried away.

The protesting students had been calling for more of a say in university matters, saying that the authorities were only accepting the minimum of input in college matters.

Hundreds of thousands of students have been on strike for much of the week in protest at tuition fees and poor funding of universities and colleges.

Their cause has swiftly been integrated into the current campaign for September’s general election, with Social Democratic chancellor candidate Frank-Walter Steinmeier pledging solidarity with his party’s youth wing on Friday evening in Munich.

He criticised Education Minister Annette Schavan, of the rival Christian Democrat Union, saying that 100,000 people had taken to the streets to call for better conditions, and Schavan had nothing better to do as abuse them.

Steinmeier called for student fees to be abolished, and the subject of higher education to be placed high on the political agenda.