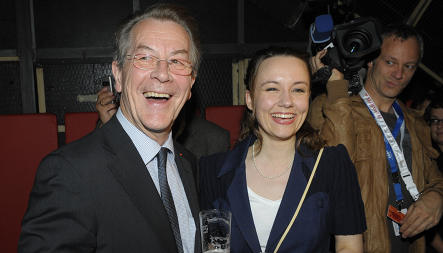 Müntefering, who is 69 and a widower, showed up at an SPD convention Saturday with his new partner, the 29-year-old Michelle Schumann.

According to Tagesspiegel, some party members said Müntefering’s move was “undisciplined,” “unreasonable,” and “obstinate” and even mooted his appearance with Schumann was the beginning of the end of his time as chairman.

The unnamed SPD critics said Müntefering was drawing attention to himself at precisely the moment when the party and German voters need to focus on the SPD’s chancellor candidate, Foreign Minister Frank-Walter Steinmeier.

The paper reported that Steinmeier himself was not pleased with having to share the limelight with Müntefering’s younger and more attractive new partner.

The criticism comes as the centre-left SPD has reached historic lows in recent opinion polls. The party pulled in just 20.8 percent of the vote in June 7 European Parliament elections. A poll released last week showed the SPD drawing just 21 percent of the vote ahead of September 27 national elections compared to the 34.2 percent share it drew in the 2005 election.

Steinmeier himself is unloved by German voters as a potential future chancellor, drawing just 27 percent of the hypothetical vote against Christian Democratic Chancellor Angela Merkel’s 60 percent in another recent poll.

Müntefering has had a long career in German politics and has served in many capacities including as labour minister and had a previous stint leading the SPD in the past. He withdrew from politics in November 2007, when his wife of many years was diagnosed with cancer. She died in July 2008 and not long thereafter, Müntefering returned to politics.