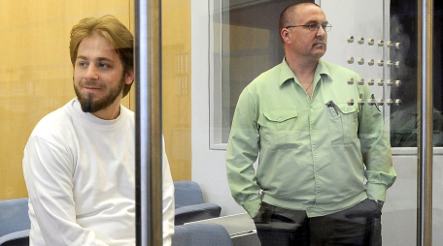 In what has been billed as the biggest terror trial in Germany since the urban guerrillas of the Red Army Faction faced court in the 1970s, four suspects have been in the dock since April of conspiring to kill Americans.

Last week, they suddenly announced in court that they would plead guilty due to the overwhelming evidence against them and their “boredom” with what was sure to be a lengthy trial.

“My client has been interrogated by the BKA since Tuesday,” Dirk Uden, an attorney for Fritz Gelowicz, 29, seen as the mastermind behind the foiled plot, told AFP. The BKA is Germany’s federal police force.

“I presume that my client will make a complete confession,” Uden said, adding that he had been present during interrogations Tuesday and Wednesday and that another member of the defence team was with Gelowicz Thursday.

Uden said he understood the other three defendants would complete their confessions by Wednesday, the date of the next hearing before the court in the western city of Düsseldorf.

The BKA and the court declined to comment Thursday on the confessions.

But a court spokesman said that he expected the four to address the judges Wednesday.

Two of the suspects, Gelowicz and Daniel Schneider, 23, are German converts to Islam, a third is a German citizen of Turkish origin, Attila Selek, 24, and the fourth a Turkish national, Adem Yilmaz, 30.

They face 15 years in prison if convicted on charges of belonging to a terrorist organisation and conspiring to mount at least three devastating bombings in German cities targeted at US citizens.

Prosecutors say the four were acting on behalf of the Islamic Jihad Union, a militant Islamic extremist group with roots in Uzbekistan and ties to Al-Qaeda.

The so-called Sauerland cell was named for a region near Frankfurt where authorities captured the suspects in September 2007 along with 26 detonators and 12 drums of hydrogen peroxide, the substance used in the deadly attacks on London’s transport system two years before.

Authorities say they dreamed of mounting attacks as deadly as those of September 11, 2001 which killed more than 3,000 people.