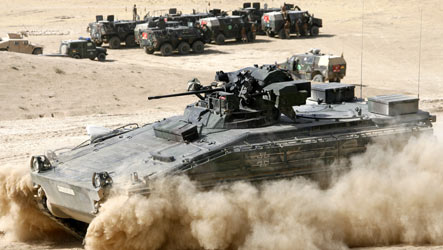 The paper said the Bundeswehr will soon begin using its Marder armoured fighting vehicles, which resemble a small tank. The Mader has 20 millimetre cannon and can carry up to 12 infantrymen.

The Bundeswehr chief of staff, Wolfgang Schneiderhan, announced the change during a confidential parliamentary defence committee meeting, according to Handelsblatt.

The centre-left Social Democrats reportedly also demanded the deployment of Tiger attack helicopters in northern Afghanistan, which falls under Germany’s responsibility in NATO’s mission in the country. The security situation in the the region has deteriorated dramatically in recent months.

The German government on Wednesday approved increasing Berlin’s troops contingent in Afghanistan by 300 to help support NATO’s deployment of AWACS reconnaissance aircraft. The decision must still be approved by parliament next month.