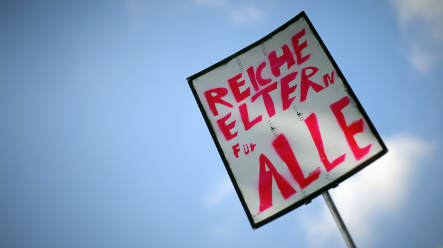 Around 12,000 students of all ages swarmed in front of Berlin’s TV tower to march in protest of crowded classrooms and new curricula that many say promotes superficial learning rathering than mastery of a subject.

“We’re here! We’re loud! They’re stealing our education,” the crowds shouted as they began their procession through the streets.

In addition to demonstrations in Berlin, 11,000 students took to the streets in Hamburg, 8,000 in Leipzig and 2,500 in Hessen. Strike organisers said they expected more than 200,000 students to protest in 90 cities nationwide.

The students in Berlin ranged in age from 14 to 40-year-olds. They say they are striking this week for smaller classrooms, more university seats and changes to the Bologna reforms, which introduced bachelor and masters programs to German universities.

“Free education or rich parents for all!” read one sign, while other banners demanded to know why banks were handed a €480 billion bailout and students have gotten nothing.

Click here for photo gallery of the student protests in Berlin.

“As students, the only way it seems to get the politicians attention is to come together in Berlin,” said 19-year-old student Flora. “I’ve just finished 13 years in this school system and it has to change. It’s not working for the students anymore. There needs to be more dialogue between students and schools.”

“These protests are partially outdated when you look at the demands,” she told the broadcaster. “They say we must abolish bachelor and masters courses in university and ignore that Germany is now part of a the European education system. There is no alternative to the Bologna process and it offers many opportunities.”

The Education Ministry is holding a conference on education reform in July. Some of the organisers and protestors of this week’s demonstrations have been invited to speak at about their concerns.

Student Dirk Forster is working on a degree in film preseveration, his second university degree and his first within the reformed post-Balogna education system.

“As a student, it’s clear that the changes came in without thorough enough thought to the system. There are still a lot of weaknesses in the system,” Forster told The Local.

The 40-year-old student added that there are too many students in the classrooms of his Berlin campus.

Schavan admitted her ministry was still analysing where improvements can be made to best serve the students.

“I believe we can get more acceptance and understanding for this structure if we look at this change critically ourselves,” she told Deutschlandfunk.

But organisers say a lot still has to be done in order for students to put away their placards for good.

“This week shouldn’t be the demands for change,” said 18-year-old strike organiser Arik Rückemann. “This is the week we get the momentum and awareness we need to put the support behind the students.

“Change in this week might not be realistic, but if we start the momentum now, it can happen,” the 12th grade student said.