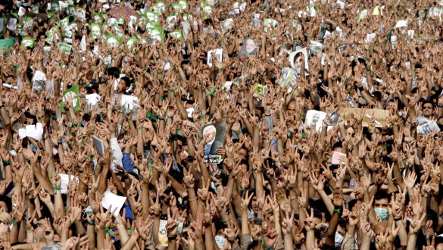 “The state secretary in the foreign ministry … has said that on the basis of our information, we believe that there were irregularities in the election,” spokesman Ulrich Wilhelm said in a government briefing.

News that supreme leader Ayatollah Ali Khameini was asking the election body the Guardians Council and the interior ministry to examine allegations of vote-rigging was “therefore very justified,” Wilhelm added.

“We are very worried by the scale of the violent clashes. We are also very concerned by the fact that as a result of these clashes there were several deaths,” he said.

“The government has repeatedly called on Iran, and I do so again today, to guarantee the right of Iranians to express their opinions through peaceful demonstrations.”

Germany also called on the Iranian authorities to “release without delay Iranian citizens arrested following the demonstrations, and for the ability (of the media) to report freely to be fully restored,” Wilhelm said.

Chancellor Angela Merkel would also discuss the situation in Iran with other European Union leaders at a summit in Brussels on Thursday and Friday, he added.

According to official results, hardline incumbent Mahmoud Ahmadinejad won the election in a landslide, but his main challenger Mir Hossein Mousavi has called the result a “charade” and has called for a new vote.

At least seven people have been killed and many more wounded in ensuing clashes, with protests reported in Tehran and other major cities after an election that has exposed deep divisions in the oil-rich Shiite Muslim nation.

The Iranian government has lashed out at enemy “plots,” hauling in foreign ambassadors, rounding up scores of reformists and imposing restrictions on foreign media.

French President Nicolas Sarkozy, in the strongest remarks so far by a Western leader, has said there was election “fraud,” while other European nations have also expressed concern about the vote and the ensuing crackdown.

US President Barack Obama, while raising “deep concerns” over the election, said Washington would not meddle in Iranian affairs.