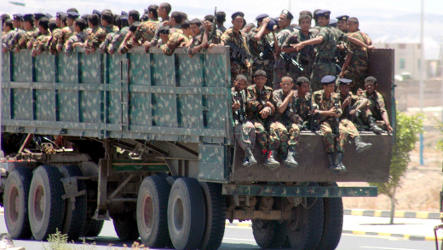 The bodies of three hostages, two German women and a South Korean woman, were found Monday. They had been shot and stabbed multiple times.

“An army of people are taking part in the search,” said parliamentarian and tribal leader Fais al-Awjari in the town of Saada on Tuesday, according to the DPA news service.

Eyewitnesses in Saada said hundreds of soldiers and policemen are searching the province and are using helicopters to help search efforts. Many civilians in Saada have also volunteered to help, DPA reported.

Security forces have expanded their search from the northwestern Saada province to the neighbouring provinces of al-Jawf, Amran, and Hajjah. German investigators are also being sent to Yemen to help the investigation.

The identity of the kidnappers remains unclear. According to DPA, Yemeni media reports have mentioned a dispute between a local drug-smuggling gang and local security forces. Militant groups associated with al Qaida have also been mentioned as possible suspects.

The remaining five German hostages are a family from Saxony with three small children and have lived in Yemen for five years, according to German media reports. The parents work as a nurse and a technician at a hospital in Yemen. The sixth hostage is a British engineer.

The two German victims, aged 24 and 26 years, came from Lower Saxony and were studying at a Bible school in North-Rhine Westphalia. The women were in Yemen doing an internship at a Yemeni hospital.

“Both had dedicated themselves to the service of Christian compassion and fell into the gruesome hands of criminals,” Wulff said in Hannover.