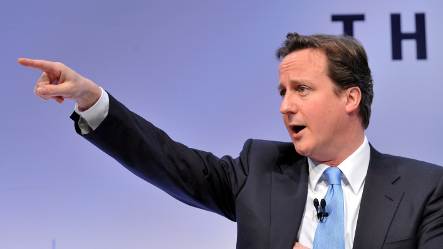 In a mock voice apparently attempting to mimic a Nazi officer, Cameron asked an audience in Norwich: “Ver are yoor papers? Now who wants to live in a country like that?”

Cameron was criticising a planned initiative by the Labour government to introduce national identity cards for all British residents.

His routine was reminiscient of a comedy skit performed by former Monty Python member, John Cleese, in his 1970s television show, Fawlty Towers.

In one episode, Cleese speaks in a fake German accent in front of a group of German tourists and marches around like cartoon Nazi, mentioning “the war” in every sentence.

Though the British press remains fixated on Germany’s World War II history, members of the audience were not amused by the potential prime minister’s words.

One woman raised her hand and told the Conservative leader, “I wonder about the wisdom of you adopting a German accent.”

“It was meant to be light-hearted,” was Cameron’s reply.