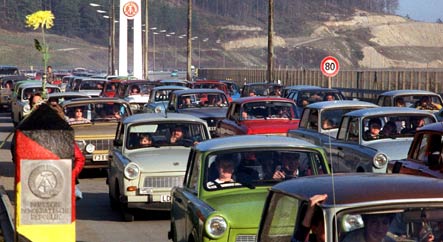 The toy-sized Trabant and its slightly larger sibling, the Wartburg, symbolised the failure of the East German economy to provide consumer goods to its citizens.

Grandparents would often order a Trabant when their grandchild was still in diapers, under the assumption that the car would finally become available when the child was old enough to drive.

Built in Saxony and Thuringia, only a few thousand of the plastic-shelled, lawnmower-engine powered cars still remain registered, according to the Federal Vehicle Traffic Authority.

“There are fewer each year,” said the agency’s Stephen Immen.

“If you see a Trabi on the street today, you look closely. And you remember the almost forgotten aroma that comes from the exhaust pipe,” said one motorist in the eastern German city of Erfurt.

In West Germany, the plastic and carboard-skinned car was simply known as the “stinker.”

The Wartburg, the high-end East German car, is even more endangered. Just 8,000 remain on the road today.

Though derided by East and West Germans alike, at some point in the early 1990s, the little ‘Trabis’ became focal points for the wave of nostalgia for East Germany that swept the region once the glow of reunification was replaced with the hangover of mass layoffs and privatisations.

The cars became cultural icons, celebrated in post-reunification films about East Germany, such as “Go Trabi, Go!” Today, tour operators in Berlin have cashed in on the Trabant’s retro appeal and offer guided tours in convoys of vintage Trabis.

Production of both models ended in 1991, meaning the newest examples are 18 years old. The cars would easily qualify for Germany’s car-scrapping program to replace old vehicles, but many of the remaining owners are fiercely loyal.

They keep their cars in immaculate condition, a throwback to East German times when the waiting time for a replacement cars could be ten years and it took creativity and connections to scrounge up scarce spare parts. The cars were pampered in order to be kept in a drivable condition.

In recent years, fan conventions and trading in specialised parts has blossomed.

“There is no more old stock. They were sold long ago,” Siegl said.

The company does continue to sell the most commonly-used spare parts for Trabants and Wartburgs and more spares are on order from a factory in Hungary though Siegl knows the cars won’t run forever.

“Sometime from now, there will be no more,” Siegl said. ”But that is the case for all vintage cars.”

Earlier this year, there was a rumour that the Wartburg name could be resurrected by Opel, which took over the Eisenach factory after reunification.

But the rumour was nothing but a lark, said works council member Harald Lieske, “which, alas originated with public.”