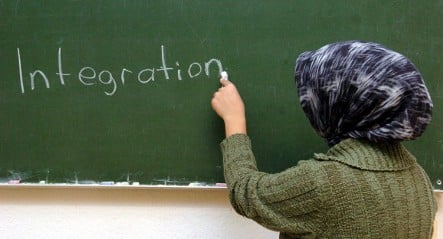 The Bertelsmann Foundation surveyed 1,581 immigrants and found that those from Turkey and Russia were most likely to feel like an outsider in their adopted country: 61 percent of Turkish immigrants and 55 percent of Russian immigrants said they lacked the recognition of native German citizens.

But of those interviewed, 69 percent of German immigrants were happy in their new country. Eighty percent said they had confidence in the German government, compared to 58 percent of the general German population.

“That most immigrants are happy with their lives here is a positive signal for Germany as a place to immigrate to,” said Dr. Jörg Dräger, a board member of the Bertelsmann Foundation. “However, integration isn’t a one-sided process. If more Turkish and Russian immigrants are to make themselves at home in Germany, they need more recognition and chances to redesign the future.”

While 58 percent of survey respondents said they felt like an integral part of German society, another five percent felt as though they had no part in it at all. A further 41 percent of respondents said they were equally connected with their homeland as they were with Germany, with three quarters of those adding that they hoped to keep their native traditions as well as adopt German traditions.

When it comes to opportunities immigrants have in Germany, 79 percent said they were happy with their jobs and 77 percent were content with their current living situation. However, when it comes to their families, 42 percent of immigrants said their children have fewer educational opportunities than their native German classmates. In the third generation of immigrant families, that number even jumps to 52 percent.

“Without fair opportunities at education, neither integration nor participation can succeed,” said Dräger.

Maria Böhmer, the head of the German government’s integration efforts acknowledged more needed to be done to recognise achievements made in an immigrant’s native country, such as education.

“Everyone in Germany should get a chance, regardless of where they come from,” said Böhmer. “It’s scandalous that 500,000 educated immigrants cannot use their university training in Germany.”

Most immigrant’s degrees are not recognised by German employers, and many then have to go through retraining programme.