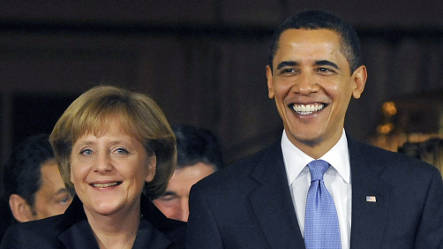 Merkel just hosted Obama on his visit to Dresden and the Buchenwald concentration camp at the beginning of June. The trip would be Merkel’s first to Washington since Obama became president.

The two-day visit is planned for June 25 and 26 and will include talks at the White House, Ulrich Wilhelm, Merkel’s spokesman said. Obama and Merkel will prepare for July’s G8 summit in Italy, discuss climate change policy and ways to reduce greenhouse gas emissions. The world financial crisis will also be on the agenda.

Though German media reports have speculated that Obama and Merkel do not have a close personal rapport, the two have already seen a lot of one another in Obama’s first five months in office. In addition to Obama’s most recent visit to Germany, the leaders have met face to face several times in the past three months.

While in Washington, Merkel will also receive a prize for her work promoting the transatlantic relationship.