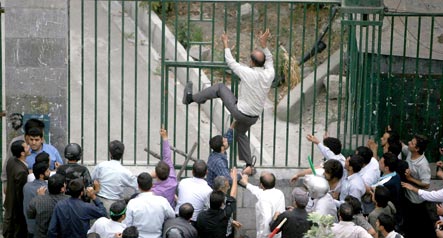 “The actions of the Iranian security forces are completely unacceptable,” Frank-Walter Steinmeier said on public television.

He also called on Iran to clear up “immediately and without delay” allegations of irregularities in the election, which according to official results was won by a large margin by the incumbent, Mahmoud Ahmadinejad.

Authorities have banned a nationwide rally set for Monday by supporters of Ahmadinejad’s main challenger in the vote, Mir Hossein Mousavi, after two days of street protests and some of the worst rioting in Tehran in a decade. Mousavi lodged on Sunday a formal appeal, calling for the results of what he has branded a vote-rigged “charade” marked by blatant irregularities and cheating to be annulled.

Steinmeier also criticised the treatment of German journalists in Iran.

The authorities on Sunday blocked German public television journalists from covering the protests. ARD correspondent Peter Mezger can no longer leave his hotel while ZDF journalist Halim Hosny and his colleagues have not been allowed to report on the events, their chief editors said in a letter to the Iranian ambassador.

“We see a breach of freedom of the press and democratic principles,” they wrote.

Iranian authorities had already barred the journalists from filming and broadcasting their images in recent days, the editors said.

ARD and ZDF insisted that they would “continue to report on the events in Iran” in a “critical, fair and independent” manner.

“We would have liked to broadcast the story of our correspondent Halim Hosny, but the Iranian authorities forbade journalists from working,” ZDF said in its nightly news programme.

Separately, around 150 Iranian students calmly demonstrated in front of Iran’s consulate in Berlin to protest against the election results, police said.