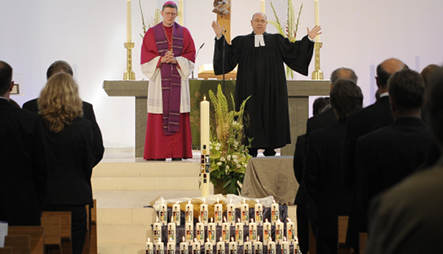 Over 150 mourners came to the event in Düsseldorf’s Johanneskirche, including Transport Minister Wolfgang Tiefensee.

The 28 German victims include 10 women, 17 men and one child. Eleven of the German dead came from Baden-Württemberg and four each came from Bavaria and North Rhine Westphalia.

The Airbus jet traveling between Brazil and France went down in the Atlantic June 6. Investigators are still trying to determine what caused the fatal crash, which took the lives of 228 passengers and crew. At least 44 bodies have been pulled from the ocean as of Saturday.