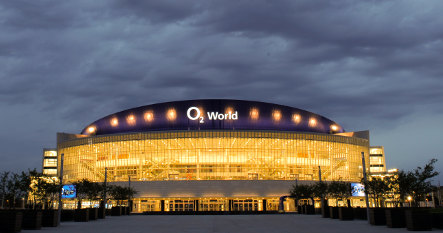 Capturing their alleged mischief for posterity, the young men on the video watch as one of them types on a laptop to change an ad for Berlin’s professional basketball team to slogans for an upcoming party.

The huge sign blinks the words “Inexcess” and then “PUF,” which stands for “Peinlich unter Freunden” – a band that will be playing in Berlin on Friday night.

PUF musician Robert Schellenburg told the daily Berliner Morgenpost he had no idea the pranksters changed the billboard on his band’s behalf. He’s just happy for the free publicity.

René Volkhardt of Kritik Records, with which PUF is signed, told the paper the label was also surprised by the clip’s runaway success online. “We never thought this video would make waves like this. Four days ago, there were a few hundred clicks. However today, there were thousands of hits within a few hours,” he said.

While not taking responsibility for the stunt, Volkhardt acknowledged that it takes a little something extra to promote an event in Berlin these days. With so many options for going out, especially on a Friday night, promoters have to get creative to get their party noticed.

Naturally for both the record label and the band, such viral publicity is PR coup regardless if it real or faked.

Certainly, the officials at the stadium don’t believe the video proves the giant screen was actually manipulated.

Katharina Telschow, spokeswoman for O2 World, said it would be impossible to access the billboard wirelessly since the information on the screen is sent to it via cable. Still, she said they were looking into the matter.