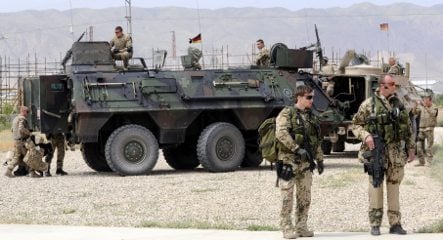 “We must have a clear advantage in fire power over the growing danger of the Taliban,” an unnamed general stationed in Afghanistan told the DDP news agency.

Germany’s armed forces, the Bundeswehr, have been faced with rising violence in their area of operations in northern Afghanistan. According to the Defence Ministry’s web site, 3,640 German soldiers are deployed in the region.

Taliban forces have recently changed tactics in the German sector. On April 29, a heavily-armed group of Taliban fighters ambushed German soldiers in two separate incidents, killing one and wounding nine others.

“This is a completely new and dangerous strategy,” said officers in Kabul, who are asking that German soldiers be equipped immediately with substantially more firepower.

Army General Inspector Wolfgang Schneiderhan will testify before the parliamentary defence committee next Wednesday about the military’s plans to develop a new strategy against the Taliban as American involvement in the conflict deepens.

A further 60,000 American troops will be sent to Afghanistan by this fall. President Barack Obama has replaced the military leaders there and recently named Lieutenant General Stanley McChrystal as the new commander in the region.

The parliamentary committee will need to reconcile this new strategy with Germany’s traditionally less aggressive approach to military conflicts. While NATO soldiers have faced heavy fighting in southern Afghanistan, German troops focused on rebuilding infrastructure in the north.

In Berlin, the speeches about Afghanistan have always been about stabilization while avoiding the word “war”. Politicians have come under further criticisms by referring to International Security Assistance Force (ISAF) soldiers as “development aides.”

Schneiderhan has rejected the call for heavy weapons to avoid looking “martial” to people in the area around Kunduz, where German forces are based.

German officers in Kabul point out Dutch troops have long used self-propelled howitzers against the Taliban. The cannons are highly accurate and can shell enemies from as far as 30 kilometres away. The Bundeswehr has plenty of artillery but has not deployed any to Afghanistan.

In the battlefield around Kandahar in the south, Canadian forces have been using German-designed Leopard tanks against the Taliban. Considered one of the best tanks in the world, it is also highly accurate from long range, allowing troops to stay further from hot spots.

Though the Bundeswehr deploys Leopards in Germany, troops in Afghanistan are outfitted with Marder tanks, which officers say are ill-equipped to do more than protect forces around the base in Masar-i-Scharif where they are stationed and nothing further.

“They just sit around and can’t be used to protect the area outside the base,” explained one officer.

Officers in Afghanistan worry that they won’t get any heavier equipment until after national elections on September 27.

Politicians fear suggesting that German soldiers need heavier weapons to combat an increasingly-aggressive Taliban will turn voters against the mission and give their votes to someone else. Conventional wisdom in the corridors of power in Berlin says it is “completely impossible” to speak about heavy weapons in the region.