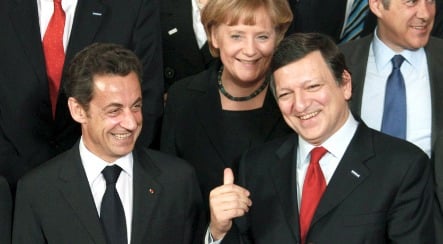 After meeting with German Chancellor Angela Merkel at the Elysee palace, French President Nicolas Sarkozy said: “We will support the candidacy of Mr Barroso, without ambiguity.”

But the leaders agreed to ask Barroso to outline his intentions for a second five-year mandate at the helm of the European Union’s executive as the 27-nation bloc battles its worst recession in decades.

Merkel also stressed that Barroso must have a game plan. “We support Mr Barroso’s candidacy but we are also saying that we would like to talk about his programme,” said Merkel.

The leaders were meeting in Paris ahead of an EU summit in Brussels that is to address the issue of a second term for Barroso, who is the only candidate standing for the top post. Barroso’s mandate expires in October, but he is seeking a second term despite the EU’s struggle to reform and criticism of its response to the financial crisis.

The former Portuguese prime minister has sought to placate critics by promising “an ambitious programme” over the next five years, including tougher supervision of banks and tackling climate change.

Many countries want Barroso’s candidacy to be endorsed by EU leaders during the summit next Thursday and Friday, and Merkel said euro-MPs must be consulted on Barroso’s mission for a second term.

A formal vote ratifying Barroso’s appointment could be held in the European parliament in July, the leaders said. A member of the centre-right European People’s Party grouping, Barroso announced he was ready to stay on after conservatives made gains in weekend EU parliamentary elections.

The EPP – the umbrella grouping of national conservative parties – maintained its status as the largest bloc with 263 seats in the 736-seat chamber in elections marred by record low turnout.

But matters are complicated by the fact that the Lisbon Treaty, the EU’s proposed reform text, once in place will alter the make-up of the European Commission.

Ireland will hold a second referendum on the treaty in October, after voters there rejected it last year.

The French president said EU leaders must follow through on a pledge to offer legal guarantees to Ireland over the reform treaty to boost chances of a “yes” victory in the second referendum.

Sarkozy and Merkel also expressed grave concern for Myanmar’s pro-democracy icon Aung San Suu Kyi, who has been put on trial by her country’s junta and appealed to China and India to intervene on her behalf.

“We are urging our partners in the region, in particular the Chinese and the Indians to help us so that Aung San Suu Kyi is well-treated, in full respect of human rights,” she said. “Germany is seeking the best way to come to her aid.”

The 63-year-old opposition leader faces up to five years in jail on charges of breaching the terms of her house arrest after an eccentric American man swam to her lakeside house in Yangon and stayed the night.