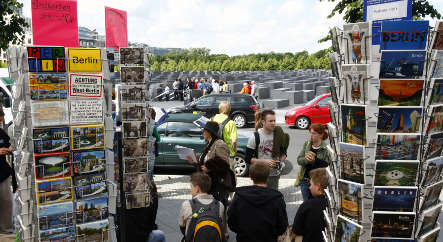 It’s that time of year again.

Giggling Japanese girls in crowding my local Starbucks. Buffoonish British teenagers on the top floor of the M19 cheering each time the bus brushes against branches. A couple of Italian women with jangling gold bracelets, so charmingly tactile and leaning in so closely to show me their map, that I check later to see if my wallet has been lifted.

Yes, the tourists are back in Berlin again (and my wallet was not stolen – shame on me for even being suspicious), descending on the city like a migrating flock of snow geese.

But you cannot complain, of course, not even a little bit: tourism is Berlin’s only serious industry and we must all be its servants.

Without tourism Berlin is, well, Detmold. So it is politically incorrect to point out that bits of the city are being eaten away, devalued, by the creeping phenomenon of turning flats into holiday apartments for out-of-town visitors.

These places, with their mismatching cutlery and IKEA curtains, are shooting up everywhere. Around 17 million people spend the night in hotels and pensions every year in Germany’s capital. But at least 750,000 sleep in privately rented apartments, and the number is rising. Perhaps bankers, in the good old times – 2006 say – urged their clients to invest their cash in units in the city’s countless prefab concrete apartment buildings with the promise of untold riches.

So Berlin found itself with thousands and thousand of small-time property speculators who thought that you could make a fortune without having to invest. No lift? Australians love to run up stairs! Filthy, cracked windows? No matter – rent to clubbers who are out all night and sleep all day. That dead mouse beginning to smell under the fridge? Chill out; the renters will be back home in two weeks.

The key factor for a holiday flat is location: it has to be close to transport links even if this means a place under the arches of an S-Bahn bridge, rattling like a machine gun every three minutes. And, if possible, it must have a view of the Berlin skyline.

That is how the Wilhelmstraße, that tired, historical relic – once the Whitehall, the Quai d’Orsay of Berlin – has become the Gold Coast for the holiday flat business. Views of the Führer’s bunker and the Holocaust memorial, an easy walk to the Felix club, the Brandenburg Gate, the Reichstag: what more could a tourist want?

Some 30 to 40 percent of the Wilhelmstraße flats are now occupied by visitors and something very important is being destroyed: a sense of neighbourhood.

Daniel Dagan, the venerable Israeli journalist, lives on one of those buildings and complains about the slow transformation of his home into a cheap hotel: the late-night parties, the rubbish sacks dumped in the hallway, the constant ringing of the doorbell by bewildered ever-changing neighbours; the sense of invasion. These are more than the musings of a grumpy old man.

There are few streets in Berlin with such a spectacular biography: the history of Wilhelmstraße 75 goes back to 1738 but was ripped down in 1949; number 74, once belonging to King Friedrich Wilhelm II, became the Foreign Office after 1919 but was blown up in 1950; number 62 was the Reichskolonialamt, then Goebbel’s propaganda ministry before being destroyed in 1947; then the Neue Reichskanzlei at 78…you get the picture.

Wilhelmstraße was the heart of German power. It was bombed hard by the Allies, then flattened by the East Germans. Eventually, high rise buildings were put up there as exclusive housing for communist bigwigs, who had no problem living so close to the Wall.

The street came properly alive just after German reunification in 1990. Pioneers from the west moved in alongside the ex-DDR stars – there was ice princess Kati Witt in the Pizzeria and Angela Merkel would bump into Günter Schabowski going out to buy the newspapers. Ex-commie spy chief Markus Wolf could be found drinking coffee. For the first time in its chequered history the Wilhelmstraße almost achieved a Kiez, or neighbourhood, feel to it.

It was an example of how architectural history can be wiped out – by bombs and urban planners – but replaced by people creating their own mixture of memories and ideas of the future. Most of the famous people moved on or died but the sense of Kiez survived and with it the spirit of the Wilhelmstraße.

Now that is disappearing. Increasingly the Wilhelmstraße apartments are occupied either by partying foreign teenagers or by former members of the East German communist party, who have to sleep with ear-plugs. A strange but important chunk of Berlin is disappearing.

It would not take much – a legal limit for example on the number of holiday apartments allowed in a residential block – to remedy this problem. But that would require imagination, a feeling for history. But these qualities are currently in short supply in Berlin these days.

My prediction: in five years time, 85 percent of Berliners will have no idea of the past significance of the Wilhelmstraße. Memory will have been wiped clean. But who cares? By that time Knut the polar bear will have fathered his own cub and the tourists will keep on coming, wave after wave.