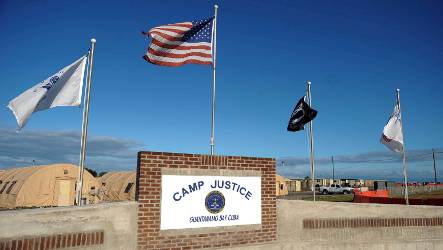 The government has not yet decided how to respond to the request, spokesman Stefan Paris told news service DPA in Berlin. It’s not clear what nationality the two prisoners have.

The American request comes a day after the Pacific island nation of Palau agreed to accept up to 17 Chinese prisoners belonging to the Muslim Uighur ethnic minority, who can not be returned to China for fear of persecution.

Interior Minister Wolfgang Schäuble had signalled opposition to an earlier US request to take up to nine of the Uighur detainees, saying they could pose a security threat to Germany.

Schäuble’s reluctance to accept the Uighurs, “has damaged the humanitarian reputation of the Federal Republic and heavily burdened relations with the USA,” Green Party head Claudia Roth said Thursday. “Schäuble stalled and stalled until the tiny state of Palau pitched in.”

Chancellor Angela Merkel has signalled that Germany is prepared to accept some former prisoners as part of US President Barack Obama’s plan to close the Guantanamo Bay camp within a year.

As a condition of settling prisoners, the German government says it will examine whether the detainees are dangerous, can be returned to their homelands or have a relationship to Germany.