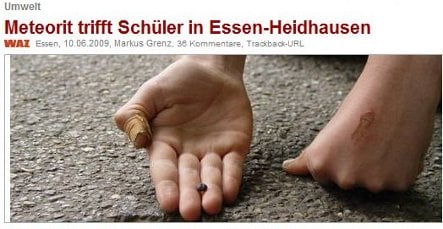 “At first, I only saw a big, white ball of light. Then, my hand hurt, and then it slammed into the street,” he told daily Westdeutsche Allgemeine Zeitung. “After I saw the white light, I felt something on my hand.”

The result was a 10-centimetre burn on the back of his left hand, but Blank knew something special had happened to him.

“I thought the meteor struck me, but it could also be a result from the heat as it went by me,” he said.

After the intial shock, Blank looked at the glowing rock the left a sizable crater in Brakeler Wald Street. He then took the iced tea from his school lunch and doused his glowing pebble and took it to school with him.

“At school, I told the story. My classmates believed me,” he said. His parents didn’t get to hear the story until the end of the school day.

Once home, Blank, who plans to focus his studies in science, tested the round, black object and already found some confirmation the pebble is from outer space: like many meteorites, the rock is magnetic.