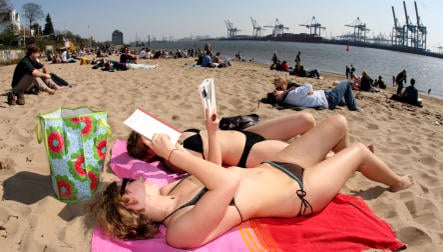 The Economist Intelligence Unit Hamburg ranked 14th and Frankfurt came in at 19 of based on 30 different criteria, including culture and environment, stability, infrastructure, health care and educational opportunities. The German capital Berlin followed closely at spot 22.

For the second year in a row, Vancouver, Canada topped the list, earning 98 of the 100 possible points in the survey, mainly because of good Canadian infrastructure. Setbacks for the Canadian city included minor crime rates and a dearth of quality housing.

The list includes six cities from Canada and Australia in the top 10 alone. Vienna, Austria and Melbourne, Australia rounded out the top three.

Other European cities making the list were Finnish capital Helsinki at seventh, Geneva at eighth and Zurich, which tied with Sydney Australia, at ninth. London came in at 51st place, followed by Rome.

“Cities that score best tend to be mid-sized, in developed countries with a low population density, benefiting from cultural or recreational availability but with lower crime levels or infrastructure problems that can be caused by large populations,” the survey said.

The most unliveable metropolitan areas in Europe were the Greek capital of Athens at 63 and Moscow, Russia at 69.

Ending the list at 140 was Harare, the capital of crisis-ridden Zimbabwe. The survey said that mostly African and Asian cities such as Teheran, Karachi und Nairobi populated the lower ranks on the list, because the quality of life is “daily put at risk.”

The Economist Intelligence Unit, however, did not consider areas in Afghanistan or Iraq for the list.