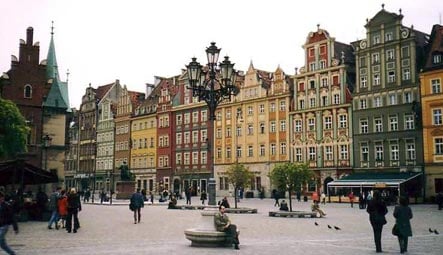 Five of his six novels play out from 1920 to 1940 on the streets of Breslau, which became Poland’s southwestern city of Wroclaw after the war shifted the two countries border westward.

They have all the hair-raising ingredients of the genre: mutilated bodies in shady back alleys and an insomniac, alcoholic policeman who doggedly pursues complex and murky investigations.

But above all, they describe in minute details a city whose past Poland’s former communist authorities long sought to suppress.

“I want to break the silence and in reality, the fact that pre-war Wroclaw was a taboo subject created a great curiosity within me about this city,” said Krajewski, 43, himself a Wroclaw native.

His latest book, “Festung Breslau” (Fortress Breslau), takes place as World War II rages. The Nazis are using the city as a stronghold, bombarded by the advancing Soviet Red Army.

For 50 years after the war, Warsaw’s old regime did everything to forget the German past of this region that the Allies – Britain, France, the Soviet Union and the United States – handed over to Poland under post-war agreements.

Wroclaw was promoted as mainly Polish with only a vague period in German hands – despite a rich architecture with Gothic ornaments and plaques adorned with German script that attested to a flourishing German culture.

Wandering its streets day after day, Krajewski discovered the secrets of his hometown.

“There isn’t one back courtyard in this city that I haven’t seen. I know all the houses, all the streets,” this Latin linguist said with pride.

His intimate knowledge of Wroclaw was key to evoking its pre-war atmosphere, which his books do with care and historical precision. The old city maps, dusty municipal annuals and registers, as well as the newspapers of the time have been his favourite research tools.

In the German annuals “you have the street name and a house by house description, with a list of residents as well as their professions,” Krajewski said.

The protagonist of his six novels is detective Eberhard Mock, a 50-something police commissioner who is alcoholic, depressive and abusive towards women. He is a bad cop who knows no moral boundaries so long as he thinks his actions will lead to justice.

“The traits that Mock and I have in common are his meticulous and pedantic character, his knowledge of Latin and his passion for bridge,” Krajewski chuckled.

“The rest of the character is inspired by Philip Marlowe, hero of American author Raymond Chandler, as well as characters from French film noir,” he said.

Though Breslau was the setting for five of his novels, each with a print-run of 300,000 copies in Poland, Krajewski sent Mock to the pre-World War II Polish city of Lvov, now Lviv in Ukraine, in a sixth book.

“I got tired of Wroclaw,” he said. He also claims he wants to abandon Mock but his readers don’t believe him.

Krajewski makes no secret of his love for Wroclaw. “I love this city and I’ll never leave it,” he said.

Few doubt that Commissioner Mock, then, will be back for more.