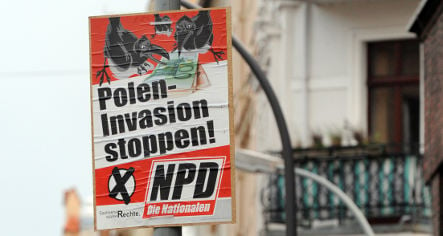 According to the magazine, the party has taken hold in the eastern parts of the country after municipal polls in seven states. There will now be NPD politicians on councils in Leipzig, Dresden, Rostock, and Erfurt.

The NPD presence in most states represents around just 3 percent of the political voice, but it shows the party has been able to establish itself in several regions.

“Although the feared landslide has held off, the right-wing extremists seem to be permanently established. Protest voters are turning into a voter base,” Der Spiegel reported.

The brown shadow in the state of Thuringia increased to 3.1 percent from zero in the last election.

The state of Mecklenburg-Western Pomerania saw an increase from 0.8 percent to 3.2 percent, which put 26 right-wing extremists in municipal-level positions – making it the state with the largest NPD political presence.

“Even when the NPD doesn’t approach the partially spectacular success of the 2006 state parliamentary elections, the 2009 municipal elections are a symbol that the NPD is at least establishing itself across the east,” the magazine said.

Despite financial scandal and lawsuits over racism on a national level, the NPD has still been able to recruit on a local level, which greatly increased the number of candidates for this election.

Meanwhile changes in voting laws, which now allow representatives from parties that get less than five percent of the vote, were part of what brought the NPD to the town halls, the magazine said.

But the one or two NPD representatives taking up seats in some city parliaments won’t be enough to influence most town councils, Der Spiegel said.