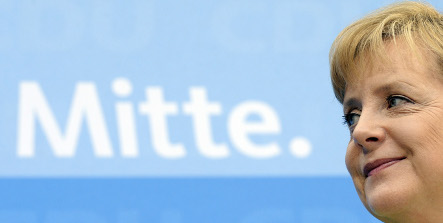 “This result gives us the courage, power and confidence to move decisively forward and our chances at the national elections have grown clearly since yesterday’s vote,” a decidedly upbeat Merkel told reporters.

Final results published on Monday showed that Merkel’s Christian Democrats (CDU) and its Bavarian sister party the CSU won 37.9 percent of the vote while its rival Social Democrats plunged to a record low of 20.8 percent.

“The gap with the SPD has clearly, you could even say sensationally, risen to 17 percent,” Merkel said.

She said that last Sunday’s election was not a “test vote” for the September poll but “it shows a trend and we will use this trend for our work in the next few weeks.”

Meanwhile, SPD leaders sought to put a brave face on the party’s European poll performance which was widely described in the media as a “debacle.”

Acknowledging that the result was “disappointing”, SPD chief Franz Müntefering told reporters: “What is clear is that we are sticking firmly to our political line.”

The party was also standing firmly behind its candidate for chancellor, Frank-Walter Steinmeier, he added.

The SPD mayor of Berlin, Klaus Wowereit said: “There is no reason to go into mourning. We are going to fight.”