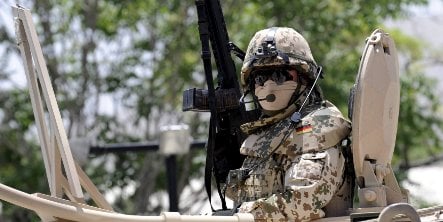 Both soldiers were shot during an attack by radical Islamist Taliban fighters near Kunduz while on patrol at 11:30 am local time on Sunday, a spokesperson said. One soldier sustained severe injuries, while the other was grazed by a bullet. But they are now both in stable condition after being flown back to a military hospital in Koblenz.

An administrator from the district of Chardara where the attack took place said that at least one Taliban fighter was killed in the gunfire exchange.

The injuries come just one week after another German patrol was ambushed in the same region, though they escaped unscathed.

According to media reports, the Taliban is reportedly planning to step up its military campaign to exploit political sensitivities in the run-up to Germany’s general election.

German soldiers recently captured a Taliban leader Abdul Razeq after a raid which some say signals a change in attitude from what has been called by other countries a timid approach.

German Bundeswehr soldiers are part of the NATO-led International Security Assistance Force (ISAF) in the relatively peaceful north of Afghanistan. Parliament voted last year to increase their numbers from 3,500 to 4,500 this August.

A total of 32 German soldiers have died in Afghanistan since their deployment in 2002.