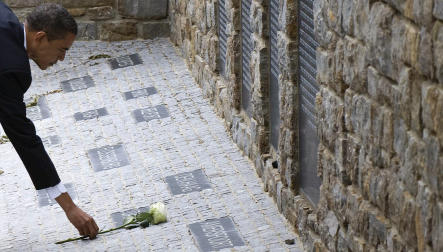 “This place is the ultimate rebuke of those thoughts – a reminder of our duty to confront those who tell lies about our history,” he said.

Dressed in a dark suit and burgundy tie, Obama listened intently to Wiesel’s recollections of camp life and laid a white rose at a memorial plaque for the camp’s more than 56,000 victims before taking a tour of its barracks and crematorium.

“Incomprehension, horror: there is no word to describe the terrible things that happened to so many people in this camp and in other concentration and death camps,” Merkel said. “I bow before all the victims.”

Wiesel was liberated from Buchenwald’s complex of camps in April 1945 by US troops who included Obama’s great-uncle, Charlie Payne. Aged 84 and frail, he decided not to accompany the president to Buchenwald, but will join Obama’s party at ceremonies for the 65th anniversary of the D-Day landings in Normandy, France Saturday.

Obama arrived in Germany late Thursday after a landmark address in Egypt to the Muslim world in which he offered a new partnership with the United States. On Friday, he said after talks in Dresden with Merkel that he believed the US was forging a path to relaunch the peace process between Israelis and Palestinians but that it could not do it alone.

“I think the moment is now for us to act on what we all know to be the truth, which is that each side is going to have to make some difficult compromises,” Obama said.

Merkel said she believed Obama’s efforts could make headway toward a two-state solution in the Middle East.

“I believe that with the new American administration, with President Barack Obama, there is actually a unique opportunity now to see to it that this peace process – or let’s perhaps be more careful – this negotiation process to be revived again,” she said.

In his speech at the University of Cairo, Obama pointedly mentioned Buchenwald and called attempts to deny the murder of six million Jews in the Holocaust “baseless, ignorant, and hateful.”

German media saw the visit as a conciliatory gesture to Israel and US Jews after his criticism of Israeli policy in Cairo.

Dresden was controversially flattened by Allied bombing in the final months of the war, killing an estimated 35,000 people. The city has been lovingly restored in the intervening years, and Merkel led Obama to the Baroque Church of Our Lady which was destroyed in the war and reopened in 2005 after a lavish reconstruction financed with donations from

Obama remains extremely popular in Germany, nearly a year after he drew a rapturous crowd of 200,000 people to the streets of Berlin as a presidential candidate.

Smiling warmly, he and Merkel played down any rumours of a rift over issues ranging from the planned closing of the US anti-terror lockup at Guantanamo Bay to recent negotiations on rescuing carmaker General Motors and its German unit Opel.

Calling Merkel “my friend,” Obama said he had neither asked for nor received any hard commitments from the chancellor on taking Guantanamo detainees.

Although she frequently called for the camp’s closure, Merkel is leery of accepting potentially dangerous inmates four months before a national election. Obama also praised European efforts on fighting climate change and said the United States was now willing to now willing to lead the way.

The president was due to pay a visit to wounded US troops at the Landstuhl medical centre in western Germany before heading to France later Friday.