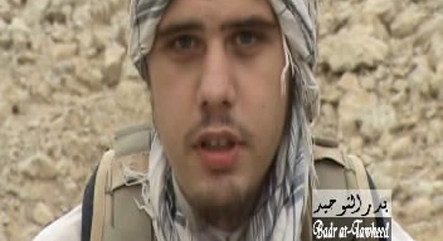 Breininger in the 2008 terrorist video he appeared in. Photo: DPA

German intelligence experts confirmed that the IJU – which threatened to attack Germany in January – is making a “push” to spread videos on relevant forums, the paper said.

In the most recent video, Breininger threatens those he calls “unbelievers.”

“We are here in Afghanistan to prepare the fight against the Kafir,” he says, meaning “infidels.”

Leaders from both al-Qaida and the IJU appear together before the camera in the video dated May 28, 2009.

The IJU is believed to be training insurgents to fight against western forces on the dangerous Afghanistan-Pakistan border.

Breininger last appeared in a video in April 2008 as a 20-year-old calling for “holy war” and pledged to carry out a suicide bombing.

In early February of 2008, Germany’s federal police agency (BKA) announced that Eric B. and Houssain al-M., both from Neunkirchen in the German state of Saarland, had travelled to Afghanistan at the end of 2007, where they are thought to have prepared for a suicide bombing there.

Both are suspected of having ties to suspected terrorists arrested in the Sauerland region in the German state of North Rhine-Westphalia in 2007 that belonged to a group known as the Islamic Jihad Union.

According to information obtained by DDP, one of these suspects, Adem Y., was closely acquainted with the German Turk Cüneyt Ciftci from the Bavarian town Freising. Ciftci blew himself up along with two US soldiers and two civilians in a suicide attack on March 3 at a US base in eastern Afghanistan.