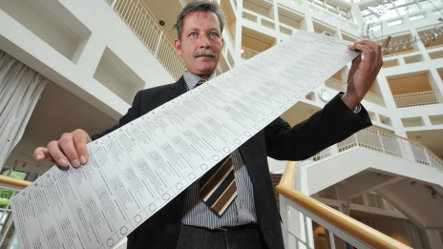 The longest EU ballot of all time. Photo: DPA

With five major parties, Germans have never been faced with dearth of political options inside the voting booth. But beyond conservative Christian Democrats (CDU), centre-left Social Democrats (SPD), pro-business Free Democrats (FDP), environmentalist Greens, and the hard-line socialists of The Left party (Die Linke), there are scores of parties of varying degrees of seriousness angling for a few votes on June 7. This diversity, of course, has a price: voters will have to wrestle with the longest ballot of all time.

Mensch Umwelt Tierschutz or Die Tierschutzpartei (Animal Rights Party): This party, founded in 1993, opposes the belief of human supremacy and advocates animal rights. They are more than just a one-note party, however, as they also stand opposed to globalisation. In the 2004 European elections, the tiny 1,000-member party still managed to garner 331,338 votes, or some 1.3 percent of the total.

Ökologisch-Demokratische Partei (Ecological Democratic Party): The ÖDP was founded in 1982 by former CDU member, Herbert Gruhl. The party aligns itself with conservative values and advocates for a reform of the current tax system, which permits environmentally harmful behaviour. They believe that a Europeanwide economic stimulus package should promote climate protection and education. The party has over 6,000 members.

Feministische Partei or Die Frauen (Feminist Party): This 14-year-old party is a classic example of a single-issue party. “More power for women” is their motto, although they also fight for all-day schools and against pornography and prostitution. The political structure of the European Union is regarded by the Feminist Party as undemocratic. Incidentally, a man is fourth on the election list of the party, which has around 400 members.

Partei Bibeltreuer Christen (Party of Bible-True Christians): This party was formed in 1989 from a group of radical anti-abortion activists during discussions about the controversial Paragraph 218, which legalises abortion under certain circumstances. This issue is still central to the party today along with ensuring the sanctity of marriage and lowering divorce rates. They support solidarity with Israel and oppose surrendering national sovereignty for the benefit of the EU. They party has 4,000 members.

Deutsche Kommunistische Partei (German Communist Party): One of the oldest small parties, the DKP was founded in 1968 and supports reverting to a communist system. About 4,000 members of the now banned Communist Party of Germany remain in the rump DKP today.

Die Violetten, für spirituelle Politik (Violets for Spiritual Politics): First formed in 2001, the Violets advocate a holistic world view of politics, powered by divine insight. Key topics include: the economy, environment and education. For the party’s approximately 1,200 members spiritual means “first and foremost commitment to all creation’s well-being.” The party also calls for a basic income for everyone.

Freie Bürger-Initiative (Free Citizens-Initiative): The FBI takes value in not being an actual party. Since the founding of the initiative, the approximately 500 members have fought for ending political party dominance. They believe that Europe should make important decisions based on the will of the people, and that the European Parliament ought to have more responsibilities.

Für Volksentscheide or Wählergemeinschaft (Voter Alliance Party): Norbert Hense, a student from Baden-Württemberg born in 1990, leads the European party List of the Voter Alliance, which has a total of 22 candidates. Their only topic: the strengthening of the immediate power of the sovereign people through referenda. Therefore, they fight for the public representation, on statewide and Europe wide levels.

Newropeans: The Newropeans are arguably the most consistent of the small parties. They run in all EU-member countries exclusively at the European elections. The approximate 500 members stand for the democratisation of the EU and feel that they are “the political answer for the lacking political leadership in the European Union and want to take action against the growing wishes of the European population.” Accordingly, the four-year-old party calls for a European government.

Piratenpartei Deutschland (Pirate Party): This party assumes the position of advocate for the information technology community. They fight for privacy protection and likewise, the loosening of copyright law. The party was founded in 2006 and already has close to 1,000 members.