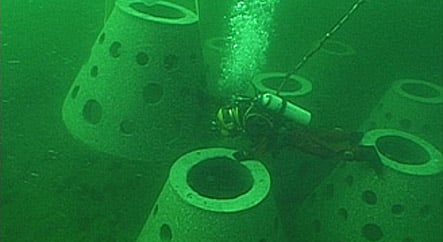 “We are very satisfied,” project leader Thomas Mohr of the National Research Institute for Agriculture and Fisheries in Rostock said of the project’s progress.

This fall scientists will build the first of a new set of reefs by sinking six-metre-wide concrete pieces over a 1200-square-metre section of the ocean floor off the coast of Rosenort.

They will then monitor the site with measuring devices, broadcasting live images and climate information to provide researchers and Baltic Sea experts more concrete data.

Scientists will also begin commercially harvesting a red algae called Delesseria sanguine, the most expensive algae of its kind, which now grows in abundance owing to the institute’s earlier research endeavour.

Project “Artificial reef Nienhagen,” which began in 2002, searched for alternative methods to repopulate the fish reserve in the area. Some 500 tonnes of rock, including 1,400 concrete blocks and 2,500 natural stone pieces, were dropped off the coast of Nienhagen.

The reef grew to be several centimetres thick with algae after a few months and marine life rapidly inhabited the area, becoming a sort of “playground” for fish and crustaceans.

“We catch and mark the fish regularly. This is an enormously high retention rate and it shows that the cod, for example, are staying at the reef for an extended period of time,” said Mohr.

Improved fish populations have encouraged other groups to take up residence in the artificial settlements, and that the extra food supply can provide for new fish stocks.

Meanwhile, the new reef is on track to become a tourist attraction, said Mohr, who regularly dives in the area.

“A platform for dive-gondolas and boats, excursion ships with land connection via cable car and the establishment of a marine restaurant at the edge of the reef are all investment possibilities,” said Mohr, adding that plans are in their infancy.

If the reef project is finished in 2012, the state will have spent €8.5 million on the Nienhagen project.

“It would be a shame if afterwards, the reef was only available to hobby divers or fishermen,” Mohr said.