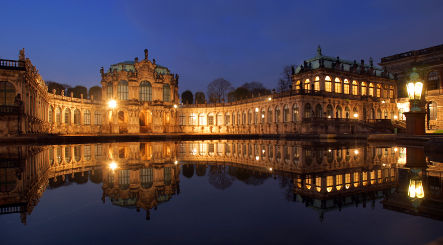 In the centre of Dresden, in the shadow of the much vaunted and splendidly reconstructed Frauenkirche, or Church of our Lady, there stands a curious fragment of wall. On closer inspection, this curve of sandstone reveals itself to be part of the remains of the original church.

The history of this piece of masonry is something like as follows: in the 1740s, the stone was cut from the banks of the Elbe River nearby, sculpted and lofted high above the city. It presided over the baroque metropolis for two centuries, and witnessed the Allied bombing of the city in February 1945. Over the next two days, tens of thousands of the city’s inhabitants died. The stone was weakened by the intense heat until eventually the whole structure collapsed.

The stone fragment spent the next four decades under rubble; East Germany came and went. Then it was dug up, cleaned and set next to the reconstructed church, but without a plaque; leaving it a riddle for the countless tourists that now come to visit just like President Obama.

Though his trip to Dresden is being billed as part of commemorations for World War II, the city has done its baroque best to rebuild the damage from the 1945 bombing. Its reconstruction began behind the Iron Curtain and quickly gathered pace after German reunification in 1990. Nowadays Dresden is an entertaining mix of breathtaking architecture by day and Berlin-style cool by night.

The old heart of the city built over the last three centuries is a phantasmagoria of baroque highlights, including the Semper Opera House, the Zwinger Palace, which also houses the Old Masters Picture Gallery; and the Dresden Castle, which includes the Green Vault, or Grünes Gewölbe, containing the treasures of the Saxon monarchy and the site of Chancellor Angela Merkel’s chat with Obama. Many of these wonders are best taken in while strolling around eating an ice cream bought from one of the many nearby stalls, but guided tours are also on offer for around €10.

But Dresden also has a pearl on display for fans of socialist buildings. The East German Kulturpalast boasts some huge, terrific murals of red-clad workers creating the socialist paradise that Obama certainly won’t see during his short time in town.

A leisurely stroll across the Elbe River takes you to Neustadt, or New Town, district, which was spared by the allied bombing raids and is therefore, somewhat ironically, home to the oldest buildings in the city. And its narrow, cobbled streets are packed with trendy little bars and restaurants.

For those who like their high culture, Dresden also has much to offer. During a recent weekend visit the city’s State Opera played selected Chopin sonatas and nocturnes while an actor recited the composer’s letters. But there’s also the famous Semper Opera House built in the 19th century. Destroyed in the war and rebuilt during by the communists, it is a building of superlative beauty. The fine, painted interiors are worth a visit even if you cannot see a performance, and the auditorium is a rhapsody in cream and gilt.

The Frauenkirche, which Obama will see, remains the focal point of the city. Some fifteen years ago, a lobby formed to rebuild the church, which was painstakingly re-assembled. A computer program was used to estimate where the fallen stones had been in the building and old wedding photographs were requested, so that carvers could reconstruct the wooden doors. The massive undertaking was completed in 2005.

The church is now surrounded by cafes and designer boutiques. On the square itself, horse-drawn carriages are available for 45-minute tours of the old town for €10.

Dresden can be reached in just over two hours by coach from Berlin, for €18 return if you book more than a week in advance. The train is slightly more expensive, but there are special fares via Deutsche Bahn’s website. The city also has air connections to Frankfurt and Düsseldorf with Lufthansa.

Obama, of course, has Air Force One waiting for him.