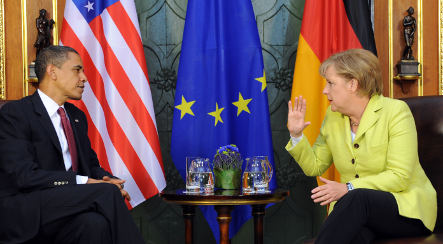 Air Force One touched down Thursday night in the Saxon capital, three-quarters of which was destroyed by Allied bombing in February 1945, though its Baroque centre has since been lovingly restored.

He met German Chancellor Angela Merkel early Friday in the heart of the city, where an estimated 35,000 people died in the final months of World War II.

After policy talks and a news conference, Obama and Merkel were due to travel to Buchenwald, the former Nazi concentration camp where more than 56,000 prisoners perished.

He will then make a brief stop at the US military hospital in Landstuhl in western Germany before flying to France where he will take part in commemorations of the 65th anniversary of D-Day landings in Normandy.

Obama arrived in Dresden from Cairo, where he delivered a landmark speech vowing to forge a “new beginning” for Islam and America and laid out a new blueprint for US Middle East policy.

A senior US administration official said Obama had had useful discussions during his time in the Middle East on the conflict between Israel and the Palestinians and Iran’s disputed nuclear programme.

“The president picked up a fair amount on both the issues,” he told reporters from Air Force One.

Obama met with Egyptian President Hosni Mubarak and Saudi King Abdullah on the first leg of his international tour.

The aide said the two subjects would figure in his talks with Merkel and then in France with President Nicolas Sarkozy, and that Obama would call British Prime Minister Gordon Brown later Thursday to discuss the same topics.

Merkel told the German press that she also planned to discuss the global financial crisis, climate change, Afghanistan and Pakistan and North Korea’s recent nuclear tests with the president.

Obama’s visit to Buchenwald will have an important personal tinge as a great-uncle, Charlie Payne, helped liberate the camp while serving with US forces in World War II.

At least 56,000 prisoners died there in horrendous conditions.

Payne, now 84 and in frail health, decided not to accompany the president to Buchenwald, but will join Obama’s party at the Normandy ceremonies at the US war cemetery at Colleville-sur-mer.

Obama pointedly mentioned the importance of Holocaust remembrance in his speech at the University of Cairo.

“Six million Jews were killed – more than the entire Jewish population of Israel today. Denying that fact is baseless, ignorant, and hateful,” Obama said in a clear swipe at Iran’s President Mahmud Ahmadinejad.