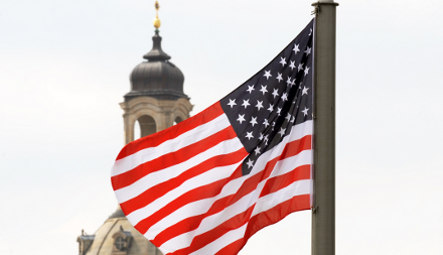 Obama was expected to land in Saxon capital around 9 pm for his brief stopover in Germany. He will hold short talks with Chancellor Angela Merkel on Friday before heading to the Nazi concentration camp in nearby Buchenwald and flying on to the US military base at Landstuhl to meet injured soldiers.

After “intensive discussions,” Merkel told daily newspaper Leipziger Volkszeitung that Obama “will see a city long considered a memorial for pain and destruction that has become a jewel again after the reconstruction of recent years.”

Though his itinerary would appear to offer Germany substantial attention before he continues onward to D-Day commemorations in France, observers on both sides of the Atlantic have been painting it as a clear slight to Merkel and her administration.

Obama reportedly refused to come to Berlin so as to avoid giving the chancellor a choice photo opportunity and a potential boost in the upcoming German election this September. If so, this would be a bit of political payback for Merkel’s refusal to let Obama speak in front of Berlin’s iconic Brandenburg Gate last summer while he was still campaigning for the White House.

Officials in Berlin, of course, are downplaying such talk of disharmony with the Americans. However, Der Spiegel news magazine reported this week that Merkel has developed a reputation for being “difficult” in Washington. Such media coverage in turn forced a White House spokesman to say Obama had lots of respect for the chancellor this week.

Transatlantic nerves have apparently frayed not only over differences on how best to save General Motors and its German unit Opel, but also the best approach to the global economic crisis in recent months. Merkel even didn’t shy from slamming the US Federal Reserve this week for its policies.

There has also been speculation that Obama might believe the Germans simply can’t offer America much help these days, regardless if it is fighting the Taliban in Afghanistan or helping boost the world economy.

When a snub isn’t a snub

Certainly, the two leaders could have a closer political friendship, but some observers are also trying to downplay what’s being read in Germany as a snub by Obama.

Jackson Janes, the director of the American Institute for Contemporary German Studies at Johns Hopkins, told public broadcaster ARD that tetchy Teutons have no reason to feel slighted.

He said Obama’s trip is focused on America’s ties to the Muslim world and the D-Day celebrations in Normandy. That the US president even managed to squeeze in time on Germany soil could also be interpreted as a concession to Merkel.

And Dresden isn’t about to let any transatlantic tensions spoil its chance to bask in the international limelight provided by Obama’s visit.

“The city is humming and very excited,” said the city’s Mayor Helma Orosz. “The eyes of the entire world will be focused on our state capital on this day.”