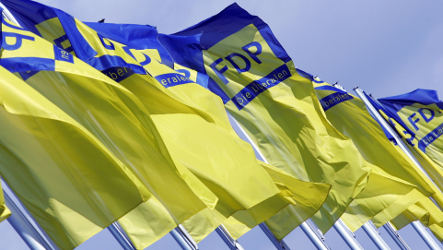 This campaign for the European Union elections is Alexandra Thein’s first experience in front-line politics. Armed with her 20-year-career as a lawyer, she hopes to help reform the European Parliament as an MEP for Germany’s pro-business Free Democratic Party (FDP).

The Local: What have you discovered during your first election campaign?

Alexandra Thein: I’ve been quite shocked by how little people know about the European Union, especially in schools. People don’t know how the EU works, as in who decides what, nor what debates are dictating the election. And I’ve noticed that people are not that interested – they are already conflating it with the German general election, and don’t have a clear idea what issues are decided nationally and what by the European Union. I’m afraid there’ll be a low turnout.

The Local: What’s the main reason for this?

Alexandra Thein: On the one hand there is not enough transparency – politicians don’t communicate what decisions are made in Brussels and what decisions are made in Berlin. A lot of them are being dishonest. For example, a few weeks ago the citizens advice hotline – 115 – was launched, which enables you to reach all public services through one phone number. And I spent the whole day seeing if any of the media – on TV, radio or in the papers – mentioned that this was the implementation of a European directive. Instead, everyone just pretended it was invented by [German Interior Minister Wolfgang] Schäuble.

The Local: Do you think a low turnout would damage the FDP particularly?

Alexandra Thein: I think it will damage all the major parties, because, apart from The Left party, we all support the Lisbon treaties. We want the parliament to get more rights and become more democratic, and if we’re sitting in parliament on the back of a low turnout we’re going to lose some of our legitimacy when it comes to negotiating with the European Council or the European Commission, which are only indirectly elected. It weakens our political position. At least we won’t have it as bad as Britain though.

Alexandra Thein: In Britain the candidates have to struggle against all the populists who don’t want anything to do with the EU and who encourage people not to vote. Luckily we don’t have that here. Here people might not care about the EU, but they’re not against it.

The Local: Are you worried that the financial crisis will damage the FDP, seeing as it’s seen as the party of the free market?

Alexandra Thein: No, I think the opposite is the case. I think our good poll ratings at the moment are down to the fact that we’re the only party in Germany that still supports the social market economy. Because of their coalition with the SPD, the Christian Democrats have unfortunately slipped very far to the left, so that people doubt whether they still believe in business. And the FDP is benefitting from this. Of course there is a crisis, but people sometimes overlook that this a social market economy. We don’t live in a neo-liberal society.

The Local: But don’t people associate the FDP with deregulation of markets?

Alexandra Thein: Deregulation of the markets, but only inside the EU. We want to take down barriers inside the EU. We’ve never said we wanted a weak state. We’ve just said that the EU should get its priorities straight, and shouldn’t decide what lightbulbs people should buy.

The Local: What can the EU do for Germany?

Alexandra Thein: Berlin needs to have more political and more economic weight. The FDP is not usually a party in favour of state grants, but there a lot of EU grants at the moment, and Berlin should be trying to get them too. For that we need a new trans-border European region, made up of Berlin, Brandenburg and western Poland with its own identity. A lot depends on infrastructure. Many businessmen have told me that only decent transport link to northern Poland is by car. We need more rail links and more flights to Poland. You can’t fly to any Polish city and back in a one day. We need to build up a friendship with Poland like we have with France now.

The Local: What about immigration?

Alexandra Thein: The experience of Britain has shown us that people only go where there is work. There wasn’t much work in Berlin, so they went to Britain and Ireland, and now that the financial crisis has broken out, they are all going back. I don’t see a problem there at all. And you hear that German workers are now finding work in Poland for better wages than in Berlin.