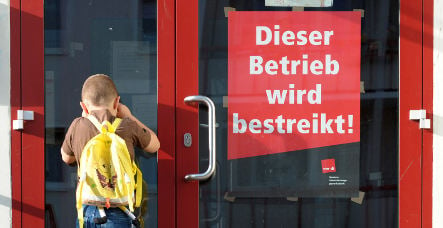 Some 3,500 educators and social workers did not show up for work at 250 facilities – known as Kitas – in the state of North Rhine-Westphalia. Meanwhile parents will have to find alternative care for their wee ones in the states of Lower Saxony, Schleswig-Holstein, Saxony-Anhalt, Saxony, Thuringia and Bremen.

But unions chose to reduce the number of educators on strike from the high numbers of previous days.

“We want to give the parents a breather here and there,” spokesperson for public workers’ union Verdi said. “It’s a transparent tactic of the employers to demoralise those affected and turn them against the workers’ side.”

Parents can expect more strikes on Friday, Verdi said, adding they were still waiting for a palatable offer from state employers and would continue striking until it arrived.

The strikes, organised by public workers’ union Verdi and Science Workers’ Union (GEW), who have said they’re ready for a long fight to force state employers into providing better wages and healthcare options for 220,000 educators across the country.

The unions refused an offer from the German Association of Municipal Employers (VKA) after negotiations in Berlin two weeks ago, saying it was “not worthy of negotiation.”