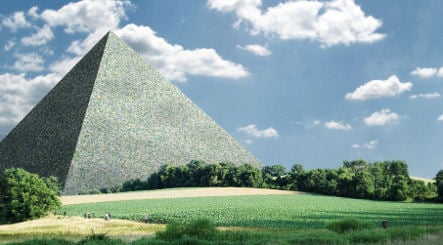 An artist rendition of Niermann's giant pyramid for the dead. Photo:René Eisfeld

Since helping found the conceptual group Redesigndeutschland in 2001, Ingo Niermann has spent time in Iran and China, invented a new version of the German language called Rededeutsch, and planned a massive pyramid for the dead in Saxony-Anhalt. The English translation of his book Umbauland, which suggests ten “solutions” for the problems facing Germany, has just been published by Sternberg Press. The Local caught up with Niermann in Berlin.

The Local: How did this book come about?

Ingo Niermann: It began with the nuclear bomb. In 2004 I co-curated an exhibition in Dresden called Atomkrieg Nuclearwar, and I did a lot of research on the subject. I became very interested in the complexity of nuclear deterrence, and in people like Herman Kahn, who was kind of the role model for Dr. Strangelove. Kahn was really a great, great personality. I encountered him several times. He was very much into LSD, and at the same time, he was very conservative and politically right-wing. He was the one asking: “How many people could die in a nuclear war, and the US could still win?” He concluded that twenty million casualties and America would still be okay. So then I got into it, and wrote a very, very long dialogue on nuclear deterrents. And all kinds of scenarios. But I realised there was something I could say specifically about Germany. And this became the German nuclear bomb chapter, where I argue that Germany should become a nuclear power.

But then next, I had this idea: I was talking with friends, and we were talking about TV, and how boring it is, and suddenly I had this idea for doing “Who Will Save Germany?” The idea was to use the format from all the casting shows, which were suddenly around at that time. But somehow I hesitated to approach German TV people, to actually do it, because I knew that if they did it, it would turn out to be horrible. So then we had the idea of doing a documentary, where we would find people, who could in some way save Germany… But then I realized that I myself would be more capable of doing this…

The Local: Of saving Germany?

Niermann: Yes. But I couldn’t call it. “I Will Save Germany!” Because of course I won’t save Germany. And anyway, the point of the show was who could save Germany… I don’t know. Maybe the title for the book should have been: “I could save Germany…” But then again, in the end it could have been too ironic. Because, you know, I’m not really that attached to Germany. I don’t have a specific affection to Germany. I’m born here, I’m raised here, but, I have no patriotic sentiments. I am one of these very typical German people who are proud they are not patriotic. And I’m really not, I’m just not. To be honest, for me it was more like a riddle.

The Local: A riddle?

Niermann: Yes, a riddle. And this is why I later came up with the formula…

The Local: Benefit minus cost, divided by commitment, equals efficiency.

Yeah. Because the less commitment which is necessary, the more efficient it is. Makes sense, no?

The Local: I guess so. But is efficiency the goal?

Niermann: In Umbauland, yes. I think this is an approach on reconstructing something. You try to keep a lot of the old, and try to change it with the least amount of, yeah, of whatever, of energy, or money… Though I should say, the aim of this is not an efficient society. That’s not what it’s about. It is only a method…

The Local: You write in the book: “I hope that Umbauland will not be misread as cynical or merely provocative.”

Niermann: Yeah, that’s true… And in a way it’s a very no-go area. There have been a few reviews which have focused just on this sentence, saying, “It could have such a great book, but why did he say this?” And I thought no, I had to say this.

The Local: Because you are serious.

Niermann: Yes. For me it was more elegant to add this… And not pathetic. With any of the solutions you could argue with me, and say that this doesn’t work, and this doesn’t work… but I really went through them, and I like them all a lot. And yeah, I guess you could call it seriousness.

The Local: Do you hope to see any of them instituted?

Niermann: Some have the chances to be realised. In a way, the TV show could still happen. In a way, more than ever. Because there is now this show thing, “Ich Kann Kanzler” And there is also this Canadian casting show, where they are looking for a great president, or something like that. Rededeutsch [Niermann’s idea for a simplified German language], I don’t know. The Lottery Party [a party dedicated to redistributing the funding that political parties receive from the German state to its supporters] would be really funny, because probably as soon as it would get some success, they would try and forbid it, by changing the regulations about what a party is. And this would make it really interesting. As for the Death Pyramid, well, we had this idea of the satellite pyramids…

The Local: It’s quite a comic and surreal vision of the universe that you embrace, no?

Niermann: You know, I totally believe in the nuclear bomb thing.