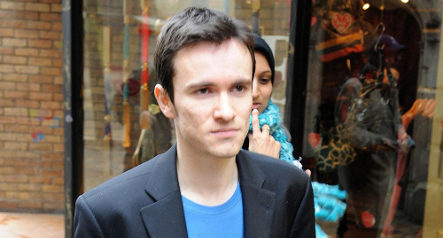 Cambridge University student Martin Jahnke told the court in eastern England that he was inspired by the notorious shoe attack on George W. Bush.

Finding him not guilty, Cambridge Magistrates’ Court judge Ken Sheraton said there was insufficient evidence to prove that Jahnke had behaved as charged in a way likely to cause harassment, alarm or distress.

Speaking publicly about the incident for the first time, the 27-year-old told the court he was not out to hurt Wen but to take a stand against his “regime.”

“I am very pleased with the result,” the pathology postgraduate student said after the two-day trial, in a statement read by a lawyer. “I would like to thank all those members of the public who have supported me, including the Chinese community. I hope now attention can move away from me to the real issue of human rights in China.”

Sheraton told Jahnke that the verdict should not be seen as an indication that the court condoned his behaviour. The judge warned Jahnke about his future conduct.

Earlier in court, Jahnke said he wanted to protest about human rights in China, object to Cambridge University allowing Wen to speak, and show solidarity with the Chinese people.

Wen was giving a lecture in Cambridge on February 2, the last day of a European tour, when Jahnke blew a whistle, branded Wen a “dictator” then threw a trainer, missing hitting him by a few metres.

“It was a symbolic protest against the presence of the Chinese premier,” Jahnke told the court. “My aim was to show solidarity with the Chinese people not represented.”

Muntazer al-Zaidi, an Iraqi journalist who threw his shoes at then US president Bush in Baghdad in December, is currently serving a one-year jail sentence.

“I was inspired by the Iraqi shoe thrower,” Jahnke said. “The idea that you could show protest in this way was in my mind. I think it really became symbolic throwing a shoe – a symbol of defiance against a regime or authority that is not accountable to anybody, a regime that uses violence. I didn’t want to hit the premier personally.”

He said it was meant to be was a symbolic protest.

“I didn’t intend to hurt people – people sitting in front of me, people on the stage or the premier,” said Jahnke.

The student, who had pleaded not guilty, said he did not think there was any chance of him hitting or injuring Wen.

“I think I aimed quite well onto that area of the stage in front of him,” he said. “He was also standing on a podium, so there was no chance of the shoe hitting him in my opinion.”

Jahnke said he presumed there would have been be a large-scale demonstration inside the lecture hall and he had merely planned to join in. But realising that no one else was starting a protest, he stood up towards the end of Wen’s “propaganda speech.”

“For me, it was terrifying to address an audience of that size,” said Jahnke. “All I was wanting to do was to get out a coherent sentence and not make a complete fool of myself.”

He said also Wen should be used to political protest.

“I wouldn’t have expected he could be easily intimidated. He seemed a hardened character to force his way up the hierarchy and stay there for 20 years,” he said. “I didn’t expect him to be emotionally distressed. His regime is responsible for a number of human rights abuses.”