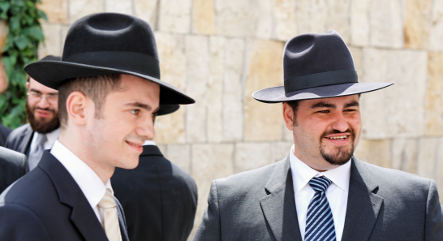 The 28-year-old Hungarian Zsolt Balla and 25-year-old Ukrainian Avraham Radbil were the first to complete studies at the new Hildesheimer Rabbinical Seminar and were honoured at Munich’s Ohel Jakob Synagogue.

Charlotte Knoblauch, president of Germany’s Central Council of Jews, attended the occasion, along with president of the Conference of European Rabbis Joseph Sitruk and German Interior Minister Wolfgang Schäuble.

Knoblauch called the event a “small miracle” that she would not have believed possible just a few years ago.

“Jewish life without rabbis is unthinkable,” Knoblauch told the congregation, adding that the Nazis’ brutal regime destroyed this tradition. “But so that survival can be turned into life, spiritual and cultural power is necessary.”

“We begin with the tradition of what was formally the most important school for German Orthodoxy. Because we believe that Judaism has a chance here,” she added.

Schäuble said he was pleased the “historic moment” could take place in the same city where Nazis began their reign of terror.

The rabbinical school was re-founded in 2005 after the yeshiva founded by Dr. Esriel Hildesheimer in 1869 was closed by the Nazis in 1938 during the Kristallnacht pogrom against Germany’s Jews. The school currently has nine students.